We partook in the seafood buffet at Harvey's Casino. Though we are definitely capable of going down and dirty and stuffing ourselves with mediocre but cheap buffet food, we were pleasantly suprised with the quality of the food present at Harvey's. The shrimp and sashimi was more than edible, but the real standout were the Alaska King Crab legs drenched in butter. All in all, worth the $35. 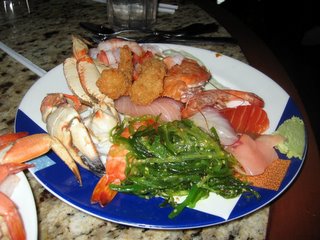 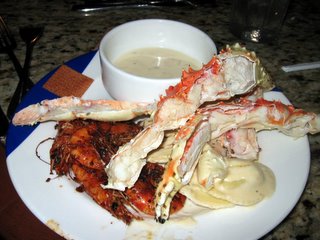 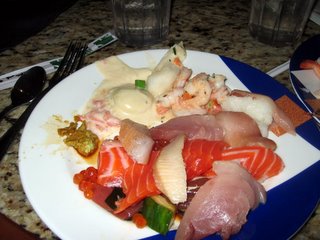 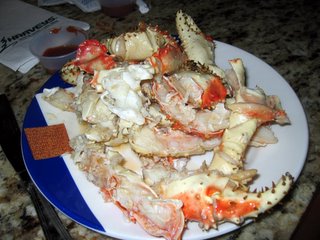 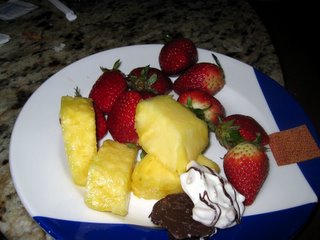 The weather was pretty crappy so we spent the day in South Lake Tahoe instead of on the slopes. After walking away from a very busy IHOP, we ended up at an Indian restaurant. Alexis got the buffet for $10 and Giao ordered a chicken mahkni (not on the menu) for $15. The food was okay, the coffee horrible. 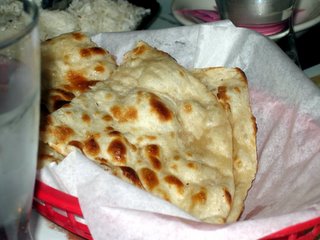 Naan (free with buffet)
This naan came straight from the kitchen to our table and honestly, they get the award for best naan ever. Perhaps it was circumstantial, but it was damn good. 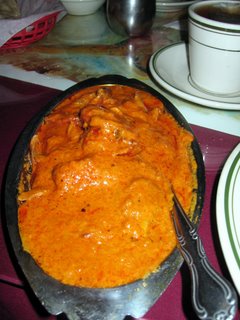 Chicken Mahkni $15
As spicy as they said it would be. 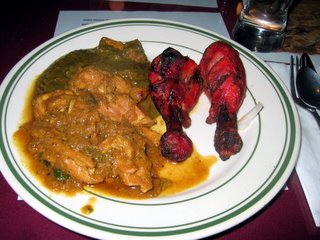 Tandoori Chicken, Chicken Curry and Saag Paneer from Buffet $10
The chicken was decent but the saag was far too salty.
Ratings:
Food: 1 (The buffet was marginal, but the makni was good and spicy)
Service: 0
Decor: 0

M___ prepared a tasty schezuan hot-pot style meal. It was actually prepared on the stove-top and then moved to the table, since we didn't have a hotpot handy. The sauce was nice and spicy. 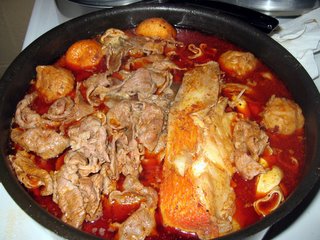 Due to our busy travel plans lately, we didn't stock up properly for our Tahoe trip, so ended up having to pay the exorbitant food prices on the mountain. We ended up ordering nachos with extra meat and guacamole in the bar in the California Lodge for $15. Usually we would pack a lunch. 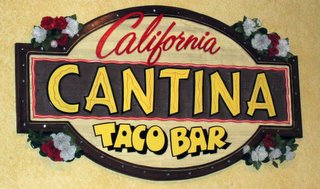 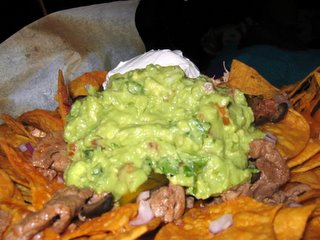 Chicken and Beef Nachos $15
Despite the ridiculous price, the nachos were pretty good. The chicken was actually moist and they didn't skimp on the good stuff.
Website

Before heading out to Tahoe, we had a quick burger at the In-N-Out. Giao had his usual dinner order (3x3, 2x2, Animal Protein). Alexis had 2 Cheeseburgers, extra cheese, Animal Protein. She decided that this location put on too much cheese. 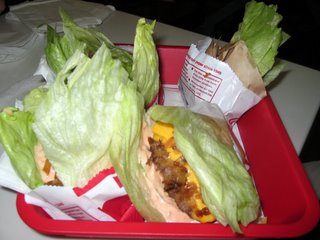 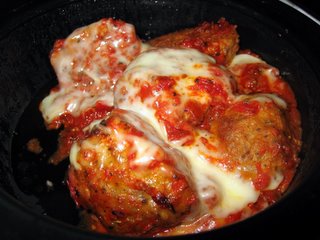 Meatball Hotplate $7
The meatballs are nice and moist and it comes with the quite decent salad shown below. 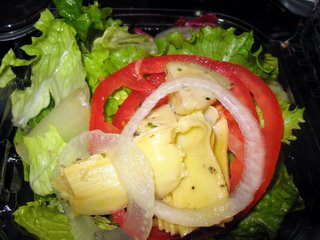 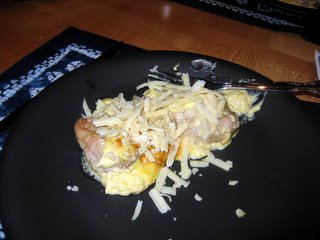 Giao made a really bad version of his Chicken Divan, after Alexis deceived him about the available ingredients. (Alexis says "it wasn't really THAT bad".) 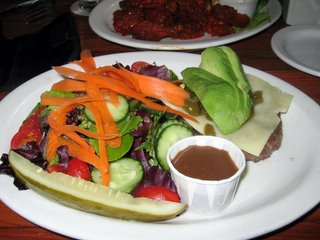 Cheeseburger with Jalapenos and Avacado and Mixed Green Salad
Standard. Decent. What more can I say? 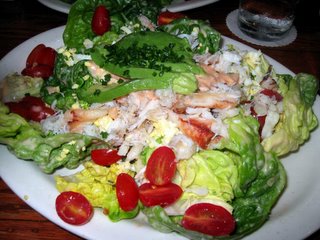 Crab Louie $13
Quite a good version of this classic salad. The butter lettuce was a nice touch. 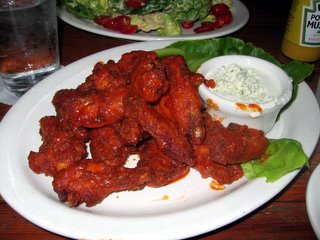 Chicken Wings $9
Too expensive and WAY too salty.
Previous Posting 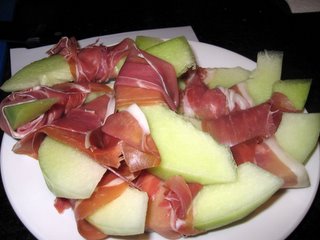 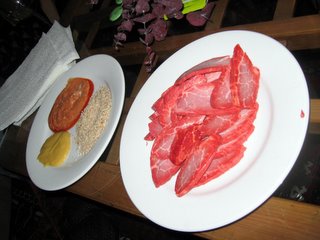 Other random leftovers were also consumed.
# posted by Giao and Alexis @ 8:58 PM 0 comments

This small Thai restaurant located in Pioneer Square serves up plates on the quick. The place seems to thrive on churn: quickly turning over the tables with saavy patrons ordering by number. They also make 'going dutch' easy by making all meals $5.50. You also order it with a 1-5 'star' rating for spiciness. We opted for the '4', which for us was a decent, pleasant amount of heat. We could have used a bit larger portions, as we walked away wanting a snack. (Which turned out to be a Cowchip cookie for Giao). 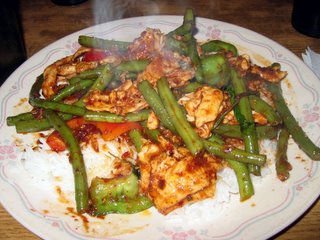 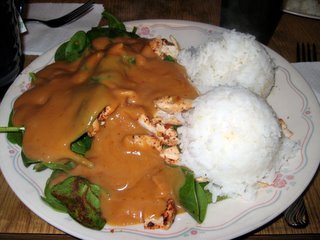 Swimming Rama
Spicy chicken on a bed of wilted lettuce "swimming" in peanut sauce. This would have been great if there were a bit less peanut sauce, but was otherwise well worth the $5.50.

Alexis chef'ed up some chicken. 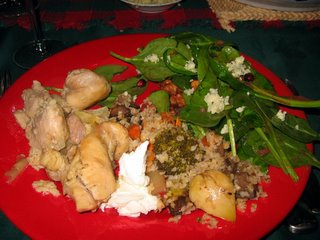 Though a bit of a misnomer, Tandoori Fire serves up a solid version of the standard lunch buffet (minus a saag dish from some reason), though without much heat. The real standouts were the meatballs and the tomato soup. It came to about $8 a head. 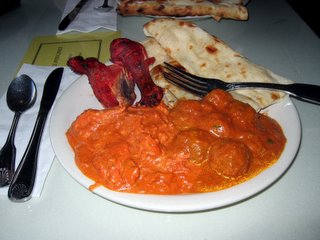 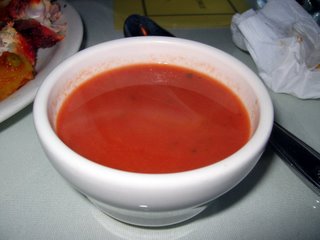 Health Code Violations
No website that I could find. 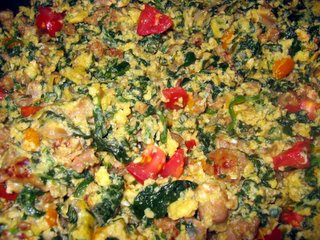 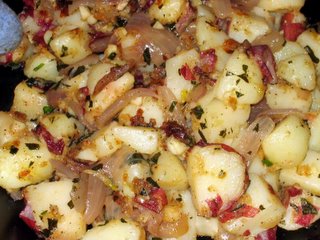 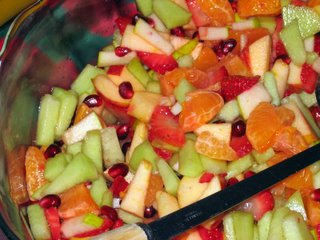