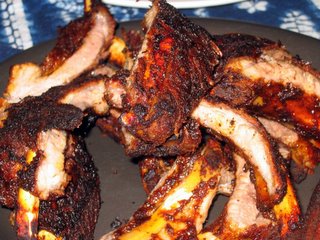 Baby Back Ribs cooked, yet again, on the Ron Popeil "Set it and forget it" Rotisserie Oven. Despite the kitsch factor, this machine really is amazing. The ribs are always crunchy and juicy at the same time. The trick may also be in the parboiling. 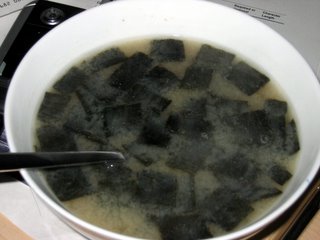 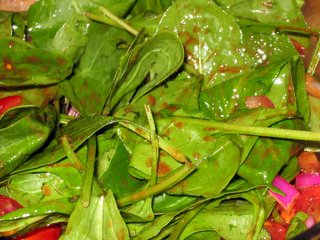 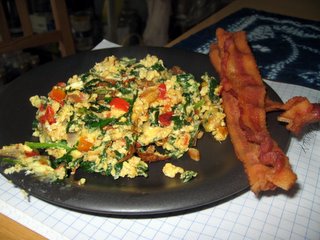 Hooray for solid food! This was our first foray into the realm of real food since getting sick on Monday night. LuLu's has made a few tweaks to their menu, but Friday night is still Suckling Pig night. Yum. 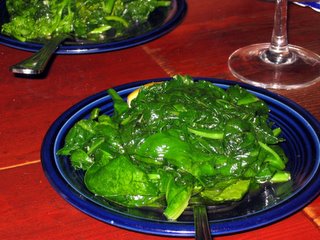 Sauteed Spinach $5
Not quite salty enough, but maybe I just can't taste because I am sick. 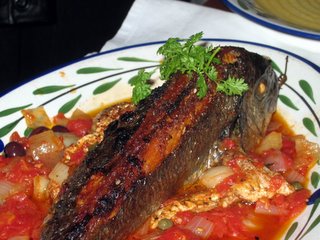 Roasted Sea Bass $20
The fish was tender and delicate and the mediterranean-eque compote upon which it was served balanced the fish nicely. 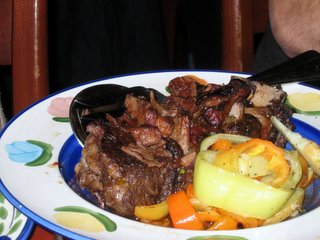 Short Ribs $22
These were both tender and flavorful. Although the accompanying veggies were a bit lacking. 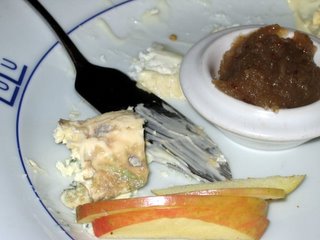 Cheese Plate $12
A creamy camambert, a delicate blue, and a soft goat cheese served with a fig compote and apple slices. We forgot to take the picture until we had practically devoured the whole plate. It was that good. 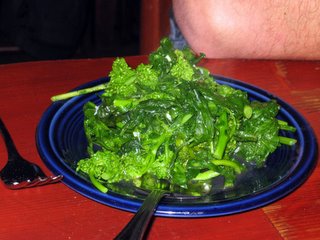 Broccoli Rabe $5
This was flavored with chili and garlic and was cooked perfectly. 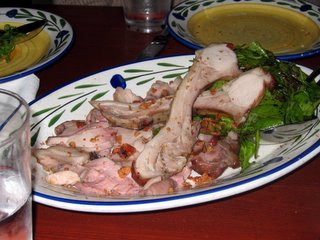 Suckling Pig $26
We always order this if we happen to be eating at LuLu on a Friday. It has not failed us yet. Those cripsy bits spinkled all over are fried pig skins and add a great texture. The only drawback is that the salad is always overdressed. 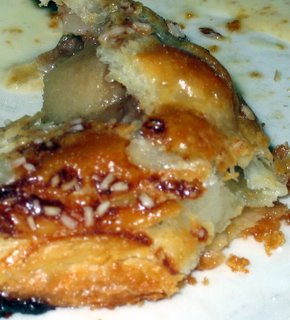 Apple Turnover $7
This was mediocre--a bit too sweet and not sour enough for Alexis. But Giao seemed to like it.

The service was again slipshod and late, so that 0 rating seems to be sticking.

We went out for yet more soup, but at least this time it's one of our favorites from Tu Lan. We were feeling a bit adventurous and ordered some spring rolls. It all went down good, and cheap ($11 total). 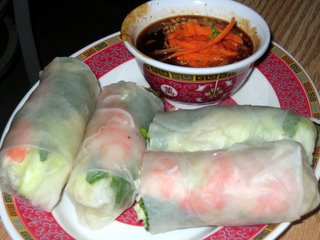 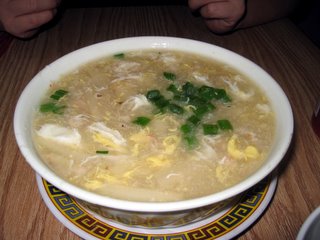 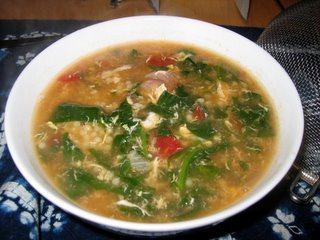 I attempted to make a more interesting version of the Italian Wedding Soup by adding tomatos, but it wasn't as good as without. Or really, maybe we are just sick of soup.
# posted by Giao and Alexis @ 9:49 PM 0 comments

Still suffering from the ill after effects of the flu, we decided to have a light lunch at the Monte Cristo Cafe. The cafe is the Embarcadero Center, with a large dining area and bar, and lodge-like decor. We sat on some sort of dias, with windows facing out toward the Ferry building. The service was friendly, but a bit clueless. At the end of the meal we recieved a check with a 13% tax. They straightened it out, but it's a bit suspicious anyway. 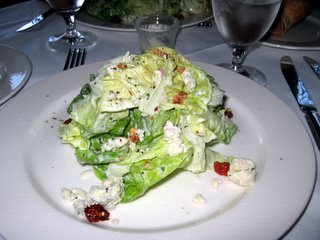 Bibb Lettuce Salad (with blue cheese, roasted chestnuts and a creamy tarragon dressing) $7
This salad was strange. All of the ingredients sounded good together, but something didn't quite gel. 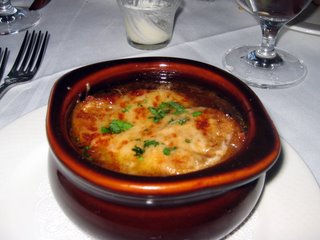 French Onion Soup $7
The soup was mediocre at best. Despite it's small size, Alexis could barely finish it. The cheese was of poor quality and the flavor lacked a certain depth.

Rating:
Food: N/A (I don't feel comfortable rating food while sick, but if pressed I would say 0)
Decor: 1
Service: 1 (Arguably a 0 with the tax problem)

Soup from last night. Still getting over that flu.

Alexis chef'ed up a variant of our favorite comfort soup: Italian Wedding Soup. This one was sans meatballs, however, as we are under the belief that because protien is harder for the body to digest, it is best not to eat it while trying to recover from illness. 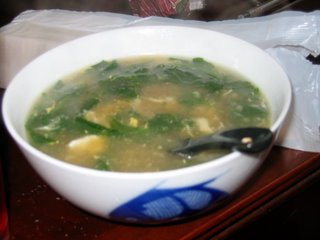 Still recovering from the flu... 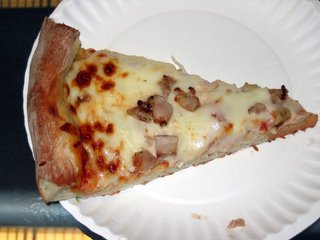 Giao tried to choke this down, but it hurt him a little bit. Alexis didn't even try.
# posted by Giao and Alexis @ 1:24 PM 0 comments

Unfortunately we contracted a very bad stomach virus, we'll spare everyone the details but suffice it to say, we are glad we have two bathrooms. Though food poisioning would seem to be a likely cause, none of the people that shared our food seem to have gotten sick. Anyhow we managed to sip on some Chicken Noodle Soup from Whole Foods, but even that was a bit much for us. 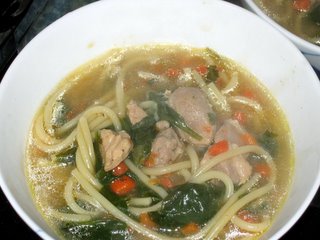 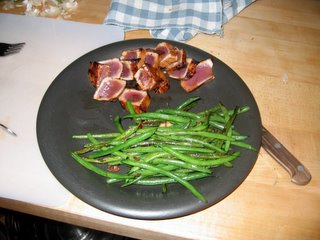 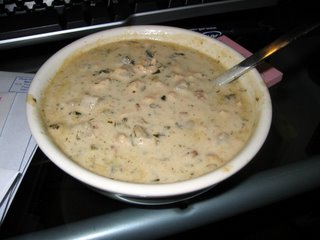 Clam Chowder
Made with turnips instead of potatos and lots of fresh basil and dill.
# posted by Giao and Alexis @ 1:19 PM 0 comments 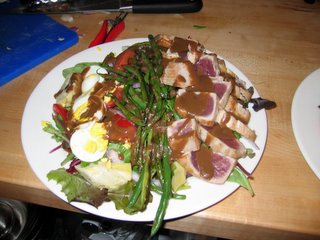 After attempting to get Chinese take-out from several places, all of which were strangely closed on Sundays, we ended up in the prepared foods section of Whole Foods... 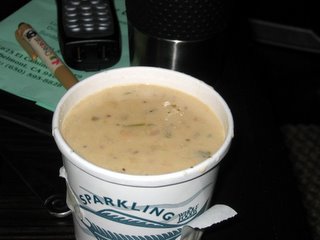 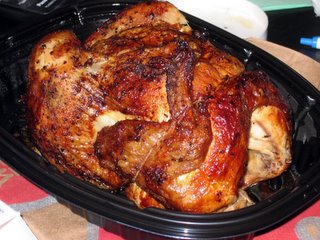 Caribbean Style Rotisserie Chicken $10
This was the smallest chicken I have ever seen. You get one twice as big for half as much at Costco and it tastes better. We were not impressed. The flavor was only in the skin and was a bit bitter in any case. 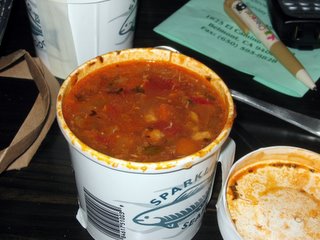