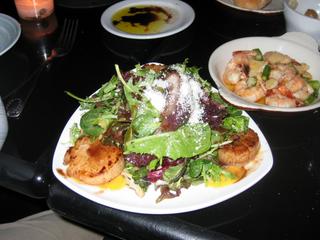 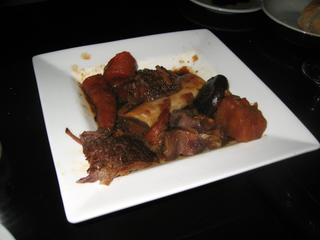 "Korean" Style Short Ribs
These ribs were more country french than Korean, and more pot-roast than ribs, but they were still good despite the misnomer. 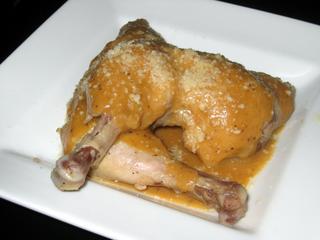 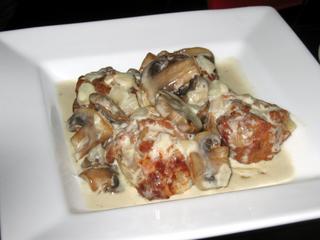 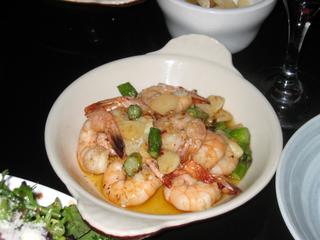 Sauteed Shrimp in Garlic and Scallions.
The shrimp could have been bigger and more tender, but still good. 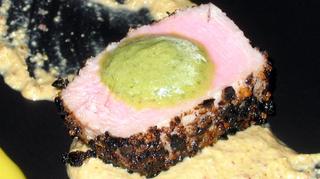 Seared Tuna with Mustard
Bland and uninteresting. Should have been raw in the middle, but was cooked through. 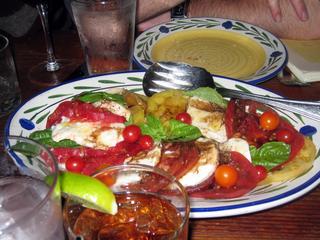 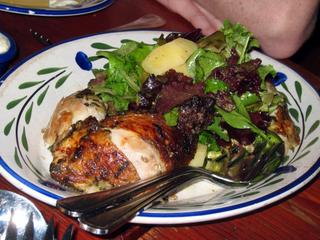 Rotisserie Chicken with Green Salad $20
Nothing special. Good flavor, but I've venture to say that Costco has a juicier rotisserie chicken and for a quarter of the price. 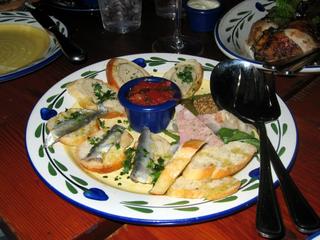 Antipasti platter of pate, anchovies and cornichons. $13
Too bread heavy. 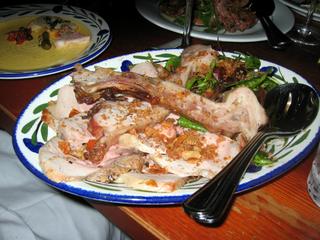 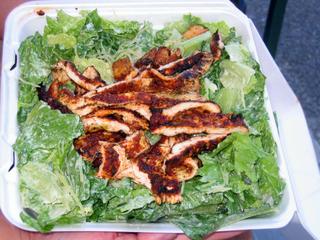 Spicy Chicken Ceasar $7
This salad is really a full meal. Juicy grilled chicken in a nice spice rub; a great default lunch if you can't think of anything else.
Ratings:
Food: 1
Decor: 0
Service: N/A

Website
Health Code Violations - (We ate at the embarcadero location, but should be similar). 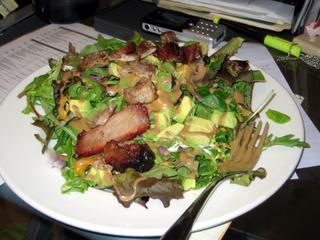 Green Salad with Avocado and Vinagrette, topped with leftover barbequed pork and duck.
# posted by Giao and Alexis @ 1:34 PM 0 comments 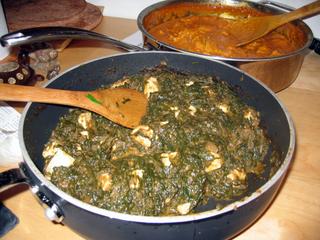 Saag Paneer
I used Queso Fresco rather than paneer, because that is what I had. Their textures are similar but the paneer is much more bland than the cheese. 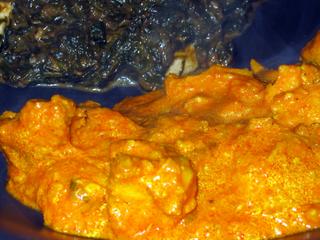 Chicken Tikka Masala
Although I make saag regularly I had never attempted Chicken Tikka Masala (although we order it all the time). The color was perfect, but the flavor, while good, was not exactly spot on. Next time, I would reduce the acid (yogurt and lemon juice) and add butter or sour cream for a smoother, silkier flavor and texture.
# posted by Giao and Alexis @ 7:31 PM 0 comments

Plouf is one of the restaurants on Belden Lane, a little alley that has a European feel to it, as the all the restaurants have tables that spill out on the street, filling it up with patrons and hosts hawking their seats. Unfortunately this makes for a hurried staff, but is made up with by the bustling environment and great people watching. 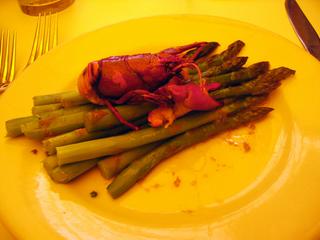 Asparagus and Crayfish ($10)
Exactly what you would expect. The Asparagus was a tad underdone for my taste. 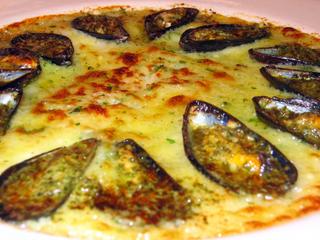 Mussels Gratinee Style ($13)
A little spare for the money (the other styles come in a pot with alot more mussels). The middle is a disappointing potato covered with cheese. The actual escargot style sauce was good, but when is way too much butter bad?
Ratings:
Service: 1
Food : 0
Decor: 2 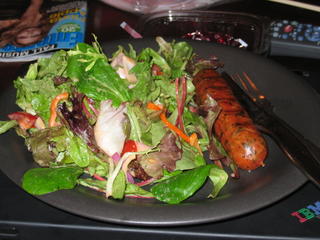 Lazy night dinner of grilled artichoke and jalepeno sausage with a green salad.
# posted by Giao and Alexis @ 9:30 PM 0 comments 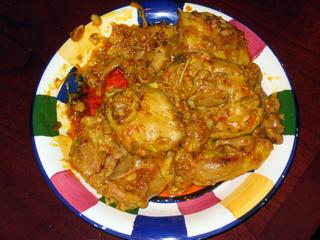 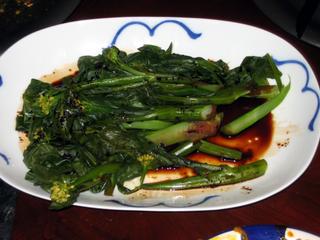 Steamed unknown vegetable with ponzu sauce. I found this at Ranch 99, but don't know what it is. It was a bit bitter, but sort of looked like giant broccoli rabe.
# posted by Giao and Alexis @ 8:15 PM 0 comments 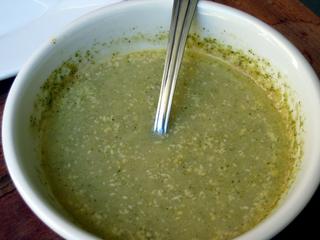 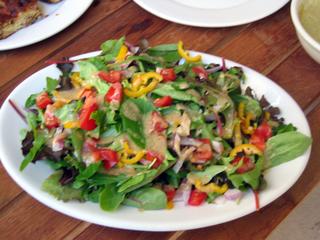 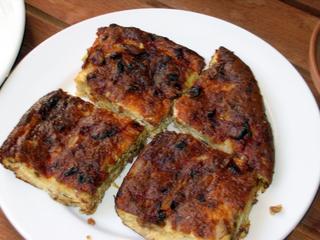 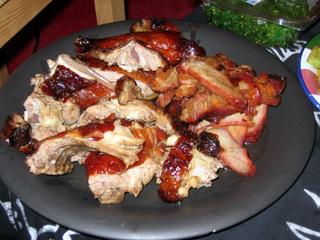 We grilled up some of the leftover ribs from last week and added to it a quick trip to the chinese takeout counter: 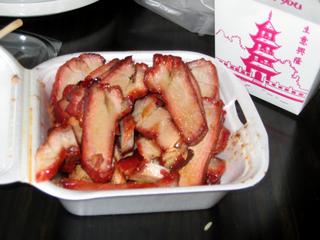 Barbeque Pork ($7)
A little on the dry side, but the sauce made up for it. 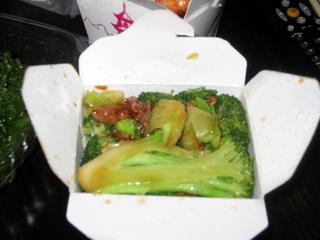 Broccoli and Beef ($4)
Actually quite good for cheap take out. Broccoli was still a bit crunchy instead of mushy. 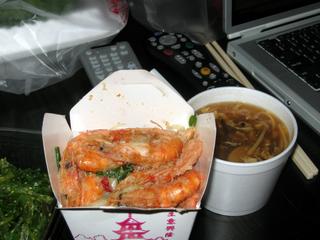 Shrimp ($6)
Deep fried with red and green chilis and scallions. You eat the shell, but it is pretty tender. 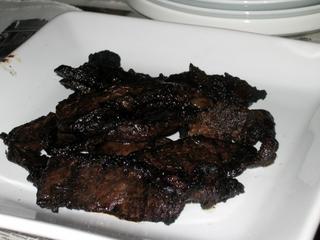 Short Ribs
Barbequed after been marinated in a Korean inspired sauce. 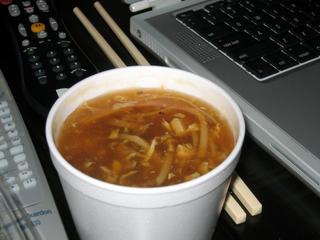 Hot and Sour Soup ( $2)
Too gelatinous, but that is to be expected. 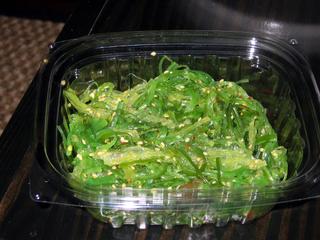