We went to a large group dinner at Anzu, the restaurant at Hotel Nikko. It was a bit strange as there were prix fixe menus specific to our group. We probably would not have ordered the same things had we been able to order from the regular menu, but we had a good time. The price ended up being $85 per person, which we thought was a bit steep for the food. 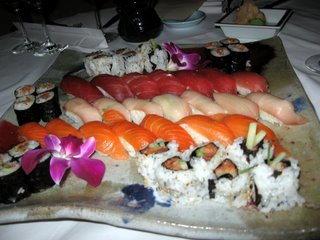 Assorted Sushi
The fish was a bit warm, but that is to be expected with trying to cut and serve sushi for upwards of 30 people at the same time. 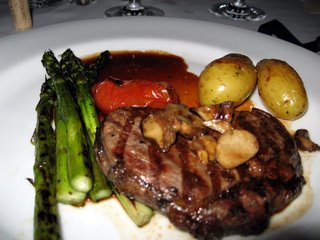 Steak with Asparagus
This was actually very tender and quite tasty. 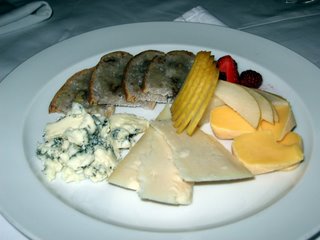 Cheese Plate
Blue, Cheddar and what we thought were Baby Bells. A good amount of (mostly) quality cheese. 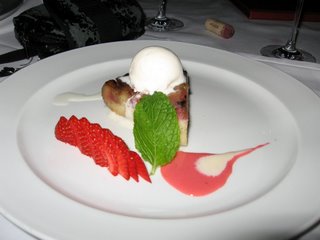 Rhubarb Upside Down Cake
The rhubarb was good, I just wish there were more of the rhubarb than the cake.
Ratings:
Food: 1
Decor: 1
Service: 1 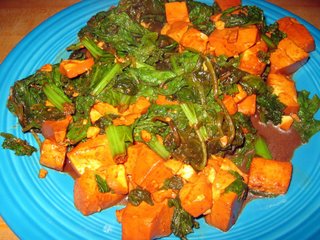 Tofu with Mustard Greens and Spinach
A quick, light lunch.

Marinate the tofu in the marinade for at least 1/2 hour. Drain the marinade and pour over the greens in a hot saucepan and sautee until wilted. Add the tofu and sautee a few more minutes, until most of the liquid is drained.
# posted by Giao and Alexis @ 2:48 PM 0 comments

We were headed to a movie and were meeting some people for libations before hand, so we went to the Fourth Street Bar and Grill, a place we walk by every day but have never gone it. It is a crappy sports bar, but was totally packed. 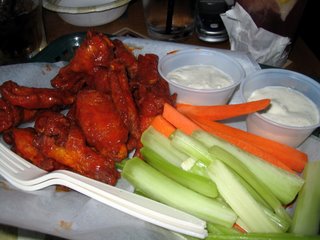 Wings $13 (for 16 wings)
The wings were flavorful, but were very tiny.

In lieu of Osha Thai, which would not deliver for some reason, we ended up with food from another Thai place. It was pretty good, but not nearly as good as Osha. The major complain was that the sauces were all too watery. But the flavors were very nice and there was a nice variety. 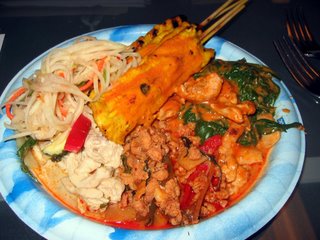 Giao had a work dinner at One Market. It was decent, but not transcendant. 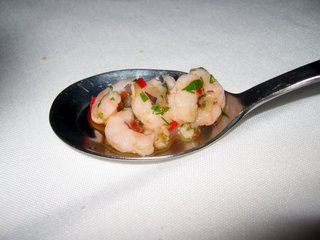 Shrimp Ceviche
A tasty bite from the chef... 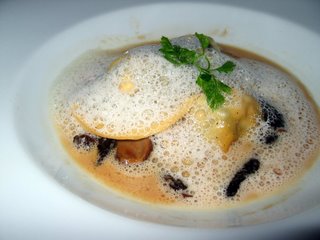 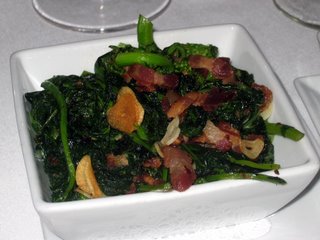 Broccoli Rabe with Pancetta and Garlic Chips
Very good. You can't really go wrong with garlic and pork in your veggies. 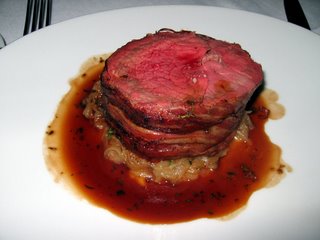 Pancetta Wrapped Filet Mingon
The texture was not right for filet. This was cooked as a roast rather than a steak, probably for too long.
Ratings:
Food: 1
Decor: 1
Service: 1

Alexis had leftover chili for dinner. 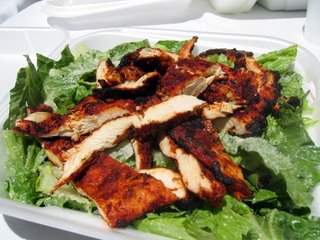 Spicy Chicken Caesar Salad $8
Lightening Foods is a sandwich and salad place with super fresh ingredients and quality "fast" food. We usually get this large salad, which definitely fills us up. 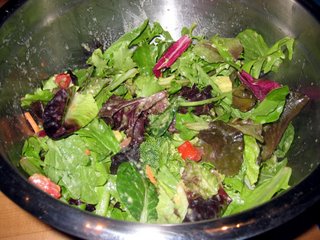 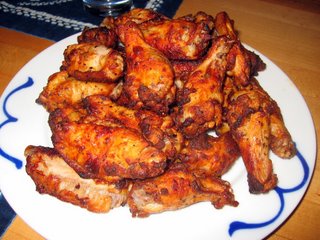 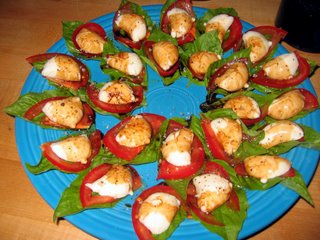 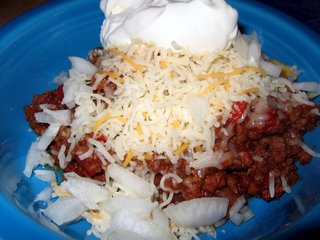 Chili con Carne
This is one of the only meals that Giao makes and it is really good, hearty, spicy chili. We finish it off with some grated cheese, fresh, diced onions and a dollop of sour cream or plain Greek yogurt.

Sautee and onions and the beef together until beef is browned. Drain all fat. Add the remaining ingredients in bring to a boil. Then turn the heat to low and simmer for 1-2 hours, until thick.
# posted by Giao and Alexis @ 7:05 PM 0 comments 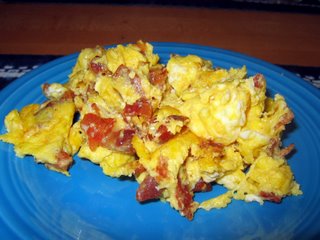 Bacon and Cheese Scramble
# posted by Giao and Alexis @ 11:12 AM 0 comments 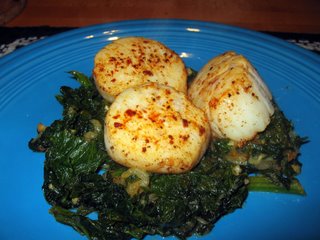 Sea Scallops with Mustard Greens
The greens were a bit salty, but the scallops were perfectly cooked. Next time I'll use water instead of broth to cook the greens and cut down on the salt.

Sautee the onions and garlic in a bit of olive oil. Add the greens and the water and simmer until liquid has evaporated. Add the cheese, lemon juice and salt and pepper to taste.

Serve on a bed of the greens. Serves 2. 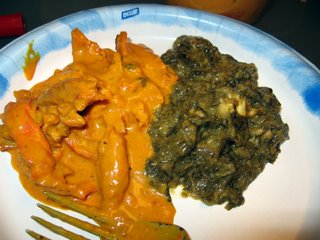 Chicken Mahkni and Saag Paneer
Chicken Mahkni (butter chicken) is a richer, better version of chicken tikka masala, made with thighs rather than breasts.

After many days of cruise food, we were happy to be home eating a simple meal. 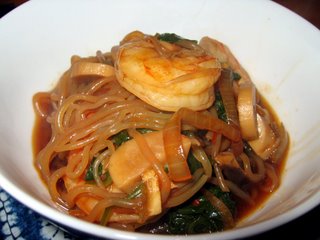 In a pan sautee the onions and garlic in the chili sauce until the onions are soft. Add the broth, soy sauce, rice vinager, oyster sauce and splenda. Then add the mushrooms and noodles. Simmer for 20 minutes. Add the shrimp and the spinach and simmer until shrimp are just cooked, about 3 minutes. Serve.
# posted by Giao and Alexis @ 8:40 PM 0 comments

Right after we got off the boat, the first thing we did was eat...we are shameless. 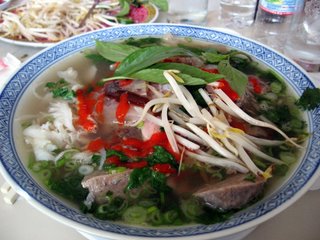 Pho with Everything and Extra Tendon
Good, but Giao said the broth wasn't pho-y enough. 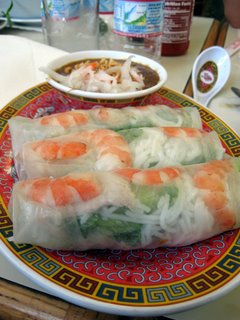 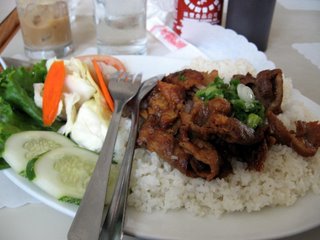 BBQ Pork
Not as good as Tu Lan's, but still pretty tasty. 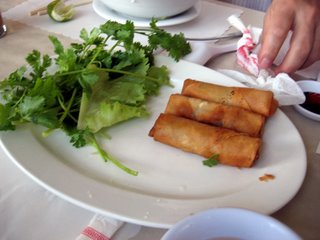