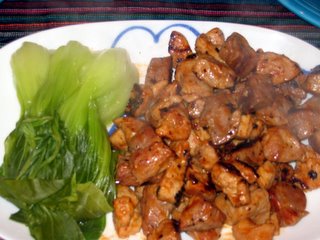 Pork in Lemongrass Sauce with Steamed Baby Bok Choy and Ponzu Sauce
The lemongrass sauce was of the bottled variety (I usually just make up a sauce with whatever is on hand). It was too salty and didn't quite taste like lemongrass.
# posted by Giao and Alexis @ 8:03 PM 0 comments


We had been wanting to try Canteen, a cute, yet modern super-tiny joint, for quite a while. The decor was better than the food, but the food was still quite good. The restaurant itself consists of a long, lime green bar with stools and about 4 tiny booths lining the wall. You can see everything going on in the place from every seat and the waitresses were both pleasant and laid back. 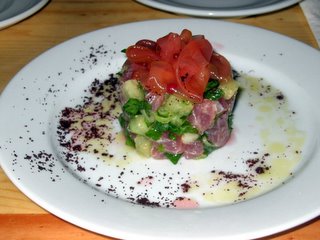 Tuna Tartare $11
I am usually wary of restaurants that try to beef up the tartare with cucumber, but in this case I felt the cucumber actually added a nice flavor and texture to the tartare. Unfortunately, this dish was a bit citrus heavy, so much so that the edges of the tuna pieces were beginning to cook in the acidity. I felt that had this been served 15 minutes later it would have been a ceviche. 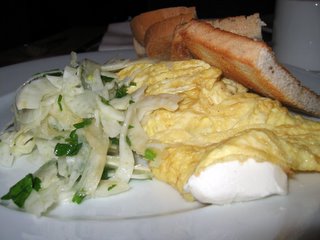 Smoked Salmon and Cream Cheese Omelette with Fennel Salad $8
This was quite good. Usually, I am more a fan of scrambles than I am of omelettes, but this was heavy on the interior ingredients and light on the egg (which was thin and delicate), just the way an omelette should be. Again, the citrus was too much, overtaking the flavor of the fennel. 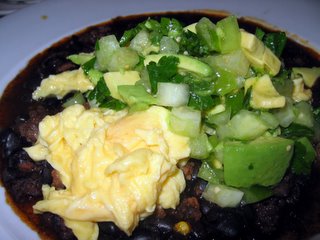 Scrambled Eggs with Meat and Beans $8
The eggs were so delicate that we beleive they used the poached scrambled eggs technique. These eggs had more flavor than when we tried them. The rest of the dish was ok, and again, the salad elements contained too much lemon juice.

Due to a late night at work, we had dinner ordered in to the office. 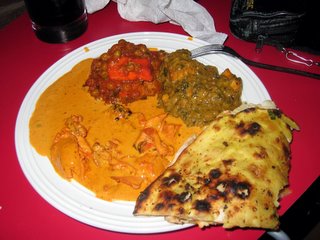 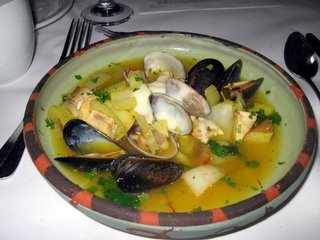 Fish Stew - A bit light on the seafood and the potatoes added nothing. 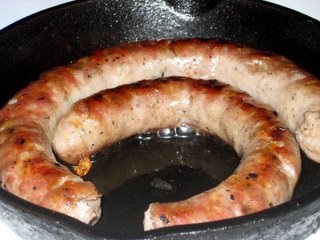 Coco500 used to be called something else and serve different food, but it recently went through an extreme makeover in its own right, and it has been on the "to try" list ever since. 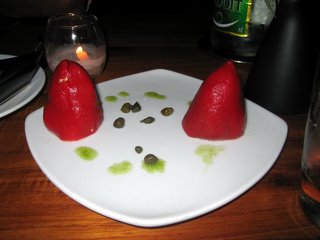 Confit Tuna Stuffed Piquillo Peppers $5
We had imagined this dish to be a bit piquante, with lovely chunks of cured tuna inside. However, what we got was bland peppers with mayo-y tuna salad inside. Duped by the description. 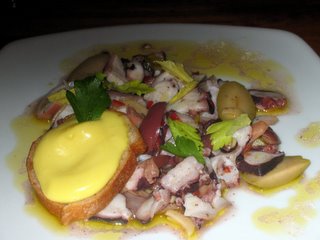 Octopus with Olives, Celery and Meyer Lemon $8
The octopus was thinly sliced and very tender and the olives mirrored the shape. Overall a very tasty dish. 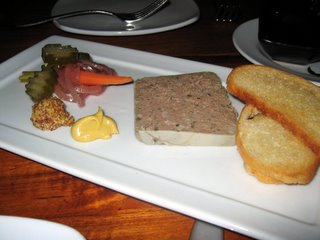 Duck Liver Terrine with Pickles and Mustard $6
This terrine reminded me of France, but cost more. Still, it had a nice earthly, comforting, taste and texture to which the whole grain mustard only added. 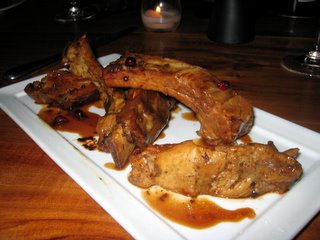 Baby Back Ribs with Pomegranate Glaze $14
These ribs failed to impress. While the meat was tender, juicy and easy to get off the bone, the glaze was simply lackluster and didn't taste of pomegranates, or much of anything. 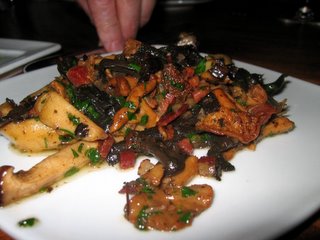 Wild Mushrooms with Bacon and Thyme $8
Very good if a bit overpowered by the bacon. And the herb was parsley, not thyme...maybe they ran out. 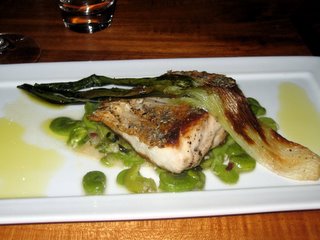 Sea Bass on a Bed of Fava beans $15
The fish was moist and flaky and the skin was incredibly crunchy and delicious. 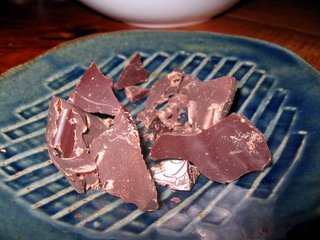 Website
Health Code Violations (These are for Bizou's, the previous restaurant in the same location with the same owner.)

Lunch at Work from Safeway

Alexis forgot to pack us a lunch and we had no time to eat out, so we had to grab something quick from Safeway. 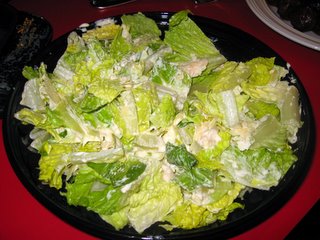 Chicken Caesar Salad $5.49
Not as bad as I thought it would be. 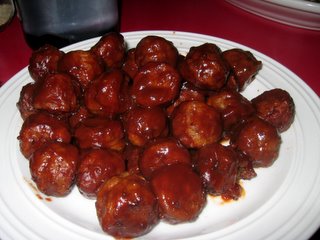 For about a year we religiously went to the Pig and Whistle every Wednesday night for quiz night. Then we went on vacation and got busy and we hadn't been back until tonight in about 6 months. In any case, it was just as we remembered. We lost at trivia and the food was still better than average for a bar. 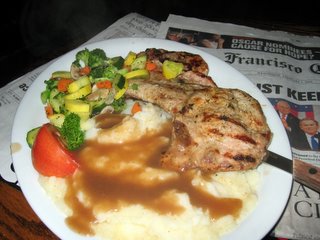 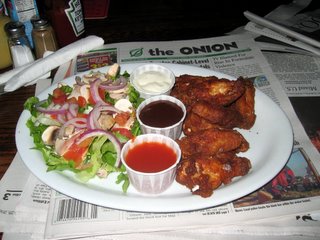 Chicken Wings $ 4
I am always impressed by the salad I get with these puny and crunchy wings. And you get 3 dipping sauces! 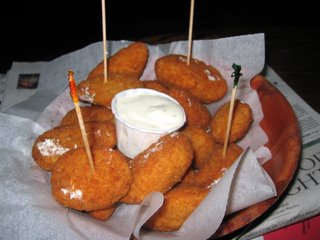 Jalapeno Poppers $4
Would be better if spicy, but a still a shameful indulgence in a the form of a basket full of deep fried peppers filled with cheese.

Ratings:
Food: 1
Service: N/A (Though it has the best bartender in town, Sweet Jenny.)
Decor: 0 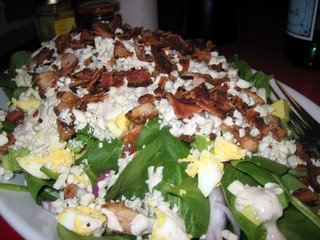 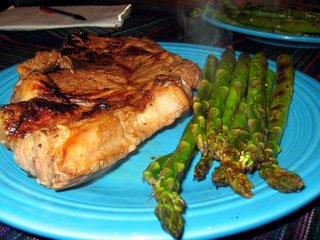 Pan Seared Rib Eye with Grilled Asparagus
We got some new cast iron pans and Giao tried to make our steaks in it. Maybe it was just that the pan was a bit too small for two big steaks, but Giao did not get the results he expected. Alexis thought it was good though.
# posted by Giao and Alexis @ 8:08 PM 0 comments 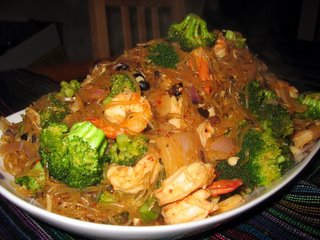 Yet another lunch catered into work, this time from Birley Sandwiches, a London based sandwich shop with an outpost in SF. 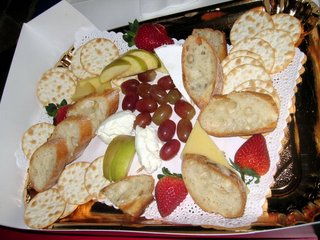 Cheese Platter for 3 $20
Expensive and bad. The cheeses were in small quantity and of low quality and the rest was just filler that we didn't want anyway. The best thing about this platter was the strawberries. 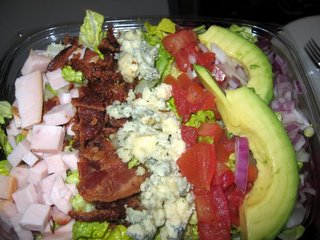 Turkey Cobb Salad $10?
Also sub-par, this salad contained too much lettuce and not enough of the good stuff, and the turkey was just chopped lunch meat. 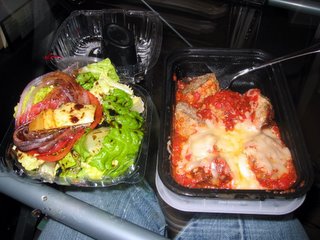 Meatball Platter
It seemed like there were more meatballs this time, but it was un characteristically not hot when we got it.

Dinner at In n' Out, Corona, CA 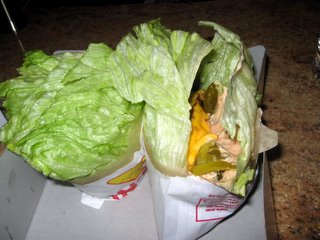 Since it was Vietnamese New Year, we went to a carnival. Not only was the food much better than other fairs, but it was much cheaper. I didn't see anything (other than sushi) that was more expensive than $3. 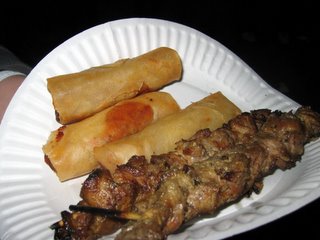 Springrolls and Barbeque Skewers ($5 approx)
The meat was smoky and juicy and the springrolls were hot and crisp.
# posted by Giao and Alexis @ 5:13 PM 0 comments

On New Year we went to Giao's Grandparents' house for a brunch/gathering with a large faction of Giao's extended family. 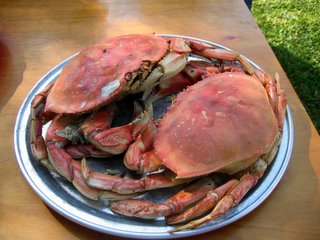 Steamed Crab
There was a lot of it and it was very good. 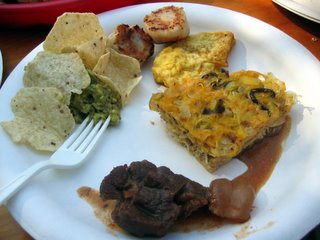