Alexis walked and walked and found nothing to eat in the financial district on a Saturday morning. Then she happened upon Clown Alley, which has been renamed Pickles, but is exactly the same except for the sign. 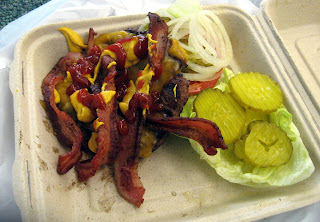 Bacon Cheese Burger Sans Bun $8
This was a step above your standard fast food burger, but with lots of bacon.

A Quick Bite at a Nationwide Chain: Tony Roma's

I don't think either one of us had been to Tony Roma's before and it didn't really bode well that it was the only restaurant in the Embarcadero Center that wasn't jam-packed on a Friday night. However, all we really wanted was a drink and a place to sit down for half and hour before our movie started. We sat down and then we saw a list of appetizers, all for $3. So, we went for the mozzerella sticks... 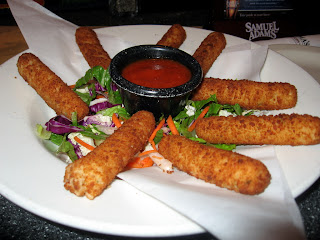 Mozzerella Sticks $3
These were very "packaged" and not great, but edible. 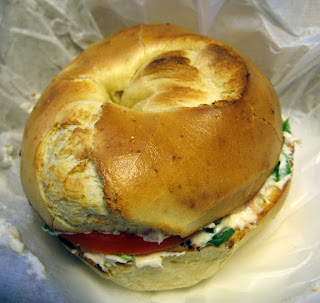 Low Carb Bagel with Lox Spread, Tomato and Onion $3.50
You know, it's been a while since we've eaten a regular bagel, so this one didn't seem too bad. It did seem rather dense, however. Our verdict, still, is "yay". 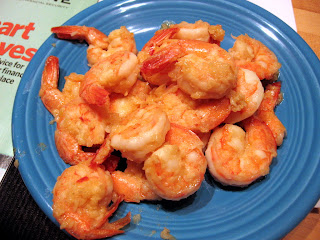 Garlic shrimp are such an easy meal. They take about 3 minutes of prep and 2 minutes to cook. There's no real recipe, simply chop lots of garlic, sautee it in some butter until just beginning to brown. Add the thawed and peeled shrimp and cook until just done, about 2 minutes. Squeeze with some lemon, season with some salt and add any chopped fresh herbs you have on hand for a quick and tasty meal. 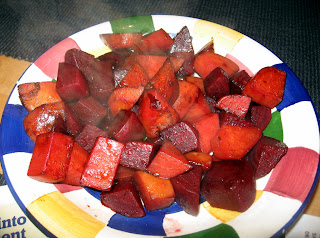 Beets are a great winter root veggie we've been experimenting with a lot lately. This time, we peeled and chopped several beets and boiled them until tender. Then we threw them in a sautee pan with a little olive oil and finished them with some balsamic vinegar and sea salt. 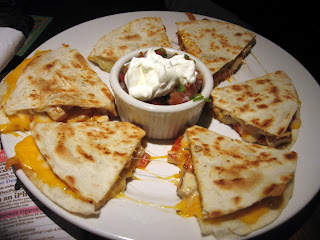 Chicken Quesadillas $7
Usually we stick with the wings at Norton's, but today we saw some nachos pass by and they looked pretty good so we decided to give them a try. They ended up being quite good, packed with chicken and cheese and topped with fresh salsa.

Brandy Ho's: The Best Chinese Delivery in the FiDi

We had a little movie screening in the office and ordered from Brandy Ho's for some tasty Chinese food. 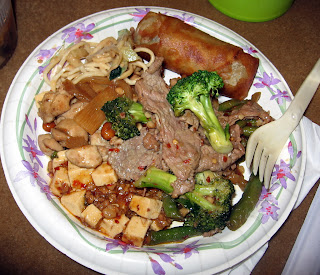 Tofu with Meat Sauce, Beef with Broccoli, Peanut Noodles and an Eggroll
Spicy and tasty and not too greasy. 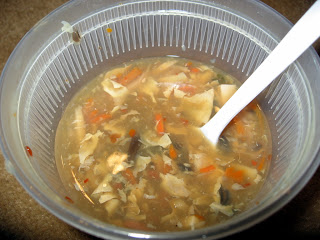 Hot and Sour Soup
Good flavor and not too gelatinous.

Usually we bring our lunch to work, but when we go out, Good Earth is one of our favorite places for both flavor and value. 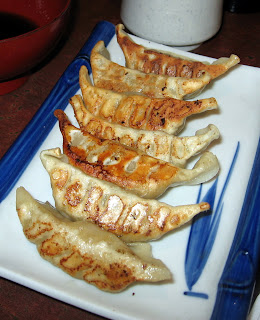 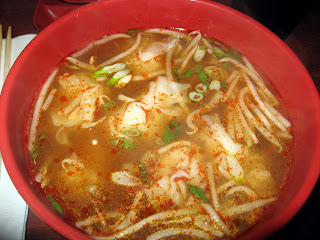 Prawn Wontons in Tom Yum Broth $7
This huge bowl of soup is salty, sour and sweet all at once. The wontons are enormous and packed with meat.
Good Earth Cafe
835 Kearny Street
San Francisco, CA, 94108
Previous Restaurant Review 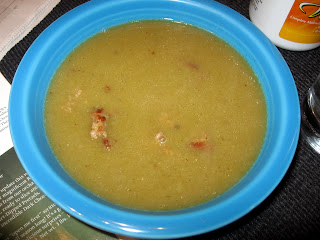 This simple soup is easy to make and nice and warming for winter.

Take the sausages out of their skins and brown, cutting into small bits with the spatula as you go. When sausage is browned and cooked through, drain and set aside. Sautee the leeks and turnips in a bit of olive oil until beginning to brown. Add the broth and bring to a boil. Reduce to a simmer and cover. Simmer until turnips are soft and puree with an immersion blender until smooth. Put soup through a strainer and then add in the sausage. 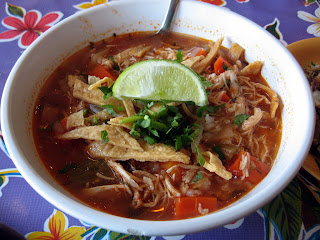 Tortilla Soup $6.50
This is a large and filling bowl of soup, full of chicken and veggies. This is probably the best deal on the otherwise expensive menu. 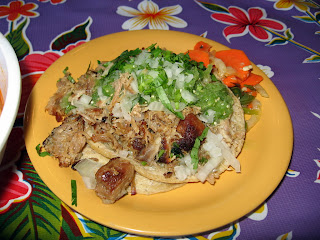 Carnitas Taco $4
This tasty taco is topped with yummy pickled veggies, although it's kind of expensive for how big it is.

A friend told us that Mix was really great. So, we decided to give it a shot. Since we had eaten an enormous amount at the Wynn Buffet earlier in the evening, we weren't that hungry when we got to our 10:30 reservation. That turned out to be a good thing, as the food was far from spectacular. Mix is the brain child of the acclaimed Alain Ducasse. Although we've never been to his other restaurants, we kinda feel like he would not have been pleased with the quality of the food served at Mix. For the price ($20 for an appetizer and $40 for an entree) this restaurant was just sub par. It kind of turned us off of "fine" dining in Vegas, especially when we know we can get food that is way better for way less at home.

Also, in true Vegas style, the service was not very good. The waitstaff was short, but not rude. And they failed the water test, pouring Giao's ($10!) sparkling water, into Alexis 1/2 drunk cup of tap water. Giao didn't get to finish his expensive water and Alexis couldn't drink the remainder of hers.

The decor, on the other hand, was stunning. Everything was white, but there were so many shapes and textures that the whole place had a varied richness to it. 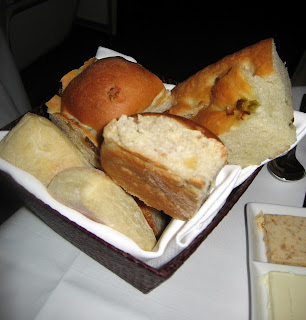 Bread with Peanut Butter and Regular Butter (gratuit)
There were lots of kinds of bread, but all of it was cold, which is a major turnoff. The idea of the peanut butter was interesting (chopped peanuts mixed with butter), but it didn't taste very good. 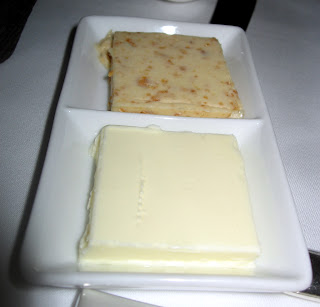 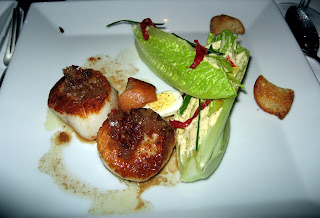 Scallop "Caesar" Salad $20
The scallops were very well cooked, but this dish sounded more interesting than it actually was. 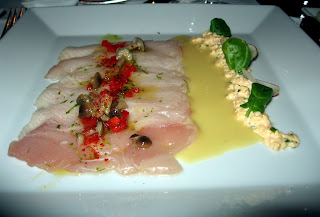 Kampachi Sashimi with Lemon Sauce and Minced Cauliflower $18
Kampachi is a truly wonderful fish, unadorned. This dish was just too over the top. The strong flavors of the accompaniments destroyed the delicate nature of the fish. We didn't even finish it. 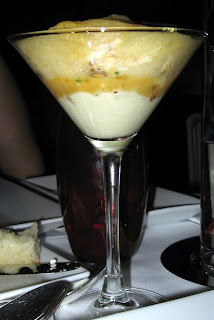 Curried Crab Martini with Cauliflower Puree $20
This dish sounded amazing and, in fact, it would have been amazing had they just used quality, fresh, crab meat as opposed to crab meat that tasted like it came out of a tin. It was not sweet, and it was stringy. The other flavors were great and we were left to imagine how great this dish could have been, had they just used quality ingredients. For the price of the dish, this was totally unacceptable. 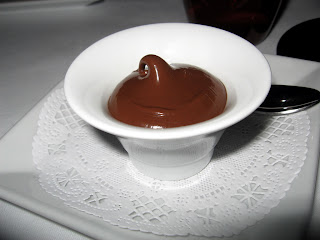 Fresh Madeleine with Nutella (gratuit)
Giao actually like this, and he doesn't like sweets. Alexis would probably have liked it too, but she was too full to even ponder more food. 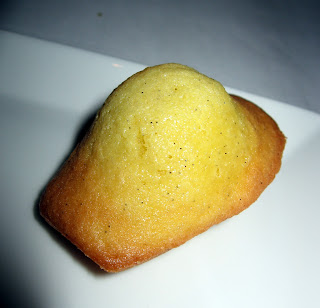 We got to Vegas on Thanksgiving day and we wanted to eat at the Wynn buffet. Little did we know that the buffet would be a draw for the locals on Thanksgiving. The line was 2.5 hours long and there was no way we were waiting that long to eat. We found David Burke, which had a reservation in 1/2 an hour and seemed like it had a decent menu. Even though we had made a reservation, when we arrived we were told to have a drink at the bar since it would be a few minutes. After we had had a drink and it had been more than a few minutes, Alexis became her usual anxious self and inquired as to when we would be seated. We were told that our table was ready, which led us to believe that telling us to have a drink at the bar was just a scam to get us to buy a drink at the bar.

When we sat down the service was worse. The waitstaff was generally unpleasant (save a very friendly bus boy). They were short, ever so slightly rude. Every time we leave San Francisco we notice how crappy the service is. In our opinion, when you are paying top dollar at a restaurant, a large part of what you are paying for is the service. When you don't get it, you feel like you've paid too much for too little, no matter how good the food. 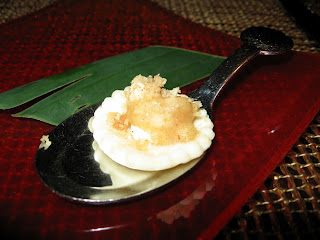 Apple "Pie" and Goat Cheese Amuse Bouche (gratuit)
This was just boring. It would have been ok, if the crust had been super crunchy, or made of parmasean or something, but as it was, it was palatable, but not much else. 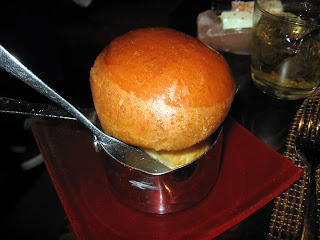 Brioche (gratuit)
This made straight out of the oven, which was nice. But the bread wasn't amazing. 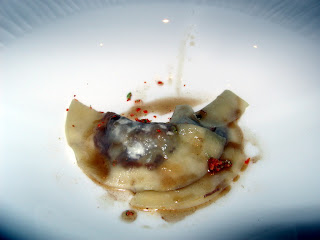 Butternut Squash Soup (below) with Beef Dumplings (above) $9
This soup was very good. It was super smooth, not to thick and not too sweet. It was a nice departure from the generally overly sweet and thick version that you see throughout the holiday season. The dumplings were tender and tasty as well. 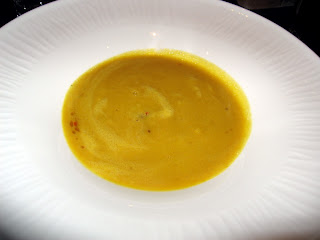 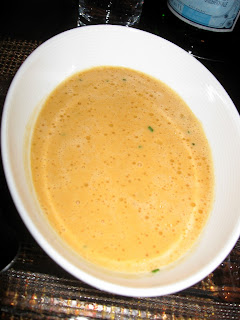 Lobster Bisque $12
This was inedible (to Alexis) and just incredibly salty (to Giao). It was thin and the lobster flavor was definitely present, but it was just to salt to be enjoyable. 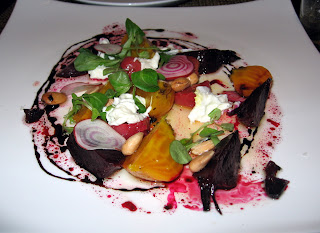 Beet and Burrata Salad $14
A character of Vegas restaurants that we have noticed was exemplified in this dish: dishes composed of one or two big, safe flavors. The food is good, but rarely innovative or interesting. This salad was made of tender beets, Jerusalem almonds, burrata, microgreens and a balsamic reduction. This dish was tasty, but the balance of beets to cheese was off. There should have been about twice the amount of cheese. The almonds added a nice crunch. 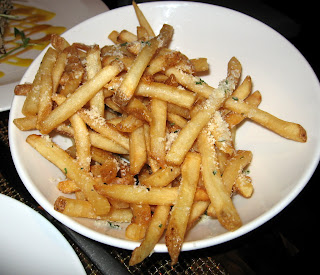 Truffle-Parmasean French Fries $7
We usually don't eat fries, but we were on vacation and these were really good. They were cut from potatoes (and still had the skin), they were very crispy and they were full of truffle flavor. Yum. 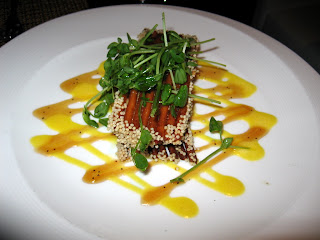 Pretzel Crusted Crab Cakes with Mango Sauce $13
This had very little filler, which made Alexis happy and the pretzel crust was interesting and tasty. The mango sauce was a bit sweet for our taste, but was well-executed. 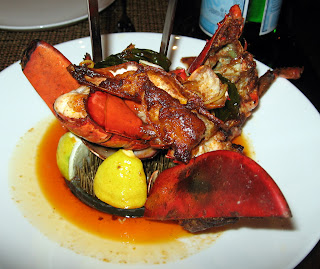 "Angry" Lobster $20
This was the star of the show. The lobster was perfect (and when I say that, I mean it) cooked and drenched in lemon and chili oil. Wow. Amazing.