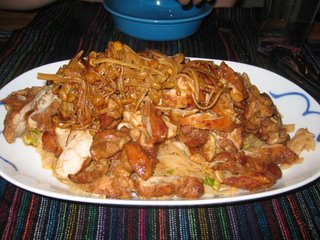 Sesame Noodles with Pan Fried Chicken and Sauteed Enoki Mushrooms
The sauce was a bit too sweet this time, but the recipe below is altered to avoid that problem.

Marinate the chicken in the above noted marinade for at least 1/2 hour. Then pan fry, flipping occasionally until done. Thoroughly mix the tahini, splenda, chili garlic sauce, lemon juice, scallions and soy together. Boil the noodles for 2 minutes and stir in the tahini sauce. Add the enoki in the last 3 minutes of cooking and set aside. Thinly slice chicken and place the chicken and mushrooms on top of the noodles to serve. Sprinkle with sesame seeds.

We went to Ikea to get some household items and couldn't pass up the Swedish meatballs. 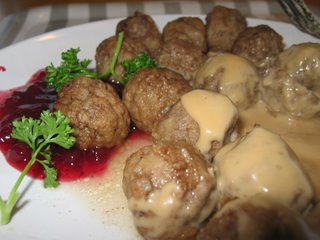 We went to San Jose to visit some friends and went out to brunch at Cardinal's, a place that reminded everyone of a casino and had the most overwhelming menu ever. The food, however, was underwheming. 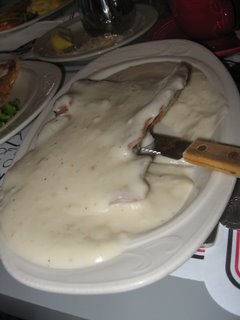 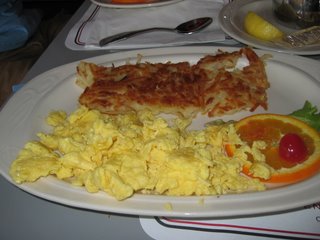 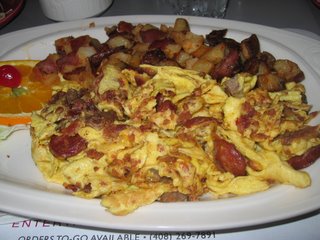 Meat Lover's Scramble $9
Linguisa, bacon, sausage and one other meat scrambled up in some eggs. Not bad.

This was our second time eating at Cortez and we came away with the same feeling: great food but WAY too expensive for the portion sizes. The service was a bit inconsistent though. On a good note, they got us seated quickly and served our food within our limited timeframe (we had to catch a SFIFF movie). On the other hand, they failed our water test (pouring sparkling into Alexis' half full glass of tap water) and they never brought us bread. 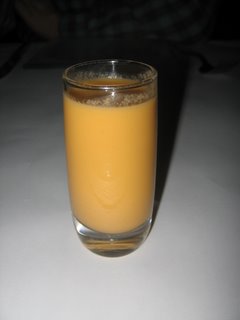 Gazpacho Shooters 2 for $6
These were refreshing and very smooth in texture. The flavor was sublte with a nice citrus tang. 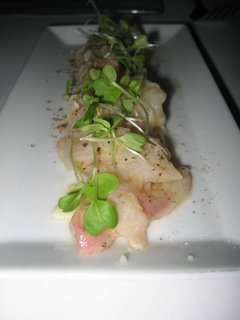 Fresh Hamachi $17
Lightly dressed and sprinkled with crunchy salt crystals, this was quite tasty. 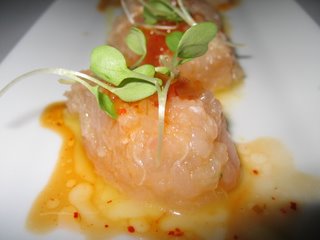 Tartare $15
We can't remember what kind of fish this was, but it was finely chopped and perfectly dressed. Yum. 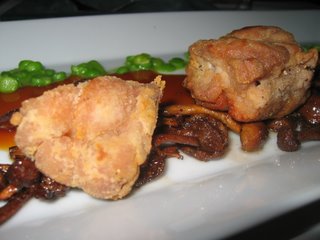 Crispy Sweetbreads with Mushrooms and Fresh Peas $14
These were crispy, tender and delicious. 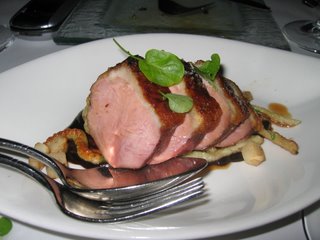 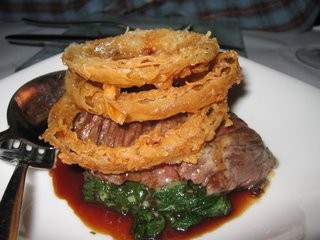 Pan Roasted Hander Steak with Creamy Swiss Chard and Crispy Onion Rings $16
The meat was tender and the chard was amazing. Giao thought it was spinach and immediately claimed it was far better than my creamed spinach. I said maybe he was right but that it wasn't spinach. So I was right. 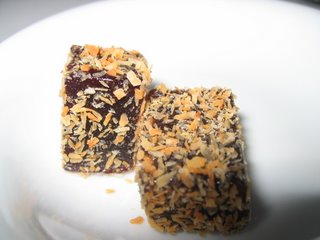 Petit Fours (gratuit)
Not sure of the intended flavor of these jelly bites. Neither good, nor bad. But free.
Ratings:
Food: 2
Decor: 2 (they have awesome light fixtures)
Service: 0 (usually a 1)

Yet another catered in lunch at work. Unfortunately, it was from Food Inc. again. This time wasn't as bad as last time, but it was still pretty bad. 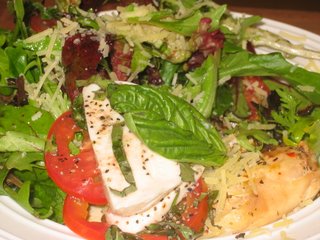 Mixed Green Salad, Caprese Salad and Baked Chicken
The salad was passable. The chicken was dry and flavorless. And the "caprese" was mounds of tomatos with a few slices of mozzerella on top.

Oola is one of our favorite spots for many reasons: it's sooo close to our apartment, it's open late, the atmosphere is cozy, yet "hip", and last, but certainly not least, the ribs. Usually the service is quite good as well, but tonight the experience was not up to par. Firstly, the timing in service was a bit off--we received our ribs about 5 seconds after the soup, so they sat there in the middle of the table getting cold while we slurped down our soup. Also, they usually have this great, thickly sliced, dark bread served in big wooden bowls and today they had standard french bread that wasn't even very fresh, and it was served on a boring white plate. 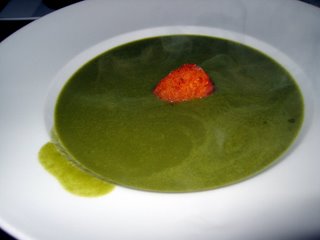 Cream of Spinach Soup with Fried Camembert $9
This would was silky in texture and light in flavor. The crispy, fried, gooey in the middle, camembert was a great compliment in both texture and flavor. 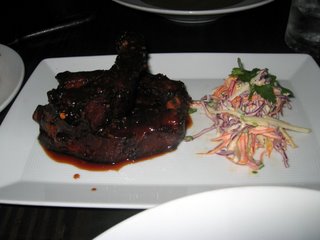 Baby Back Ribs $12
These ribs are cooked in low heat for a whopping 36 hours and the meat just falls off the bone and into your mouth. This is the first time we ordered the appetizer portion instead of the dinner portion and it proved to be not enough ribs. 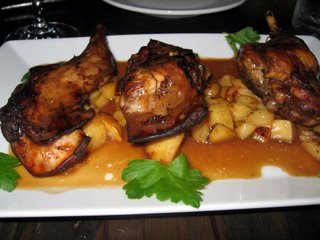 Rabbit with Cinnamon and Cardamom Served on a Bed of Roasted Apples and Potatos $25
This was the special and there is a reason that it is not a regular on the menu. The flavors sounded interesting, but were not robust enough.

Another catered in lunch, this one actually wasn't that bad. 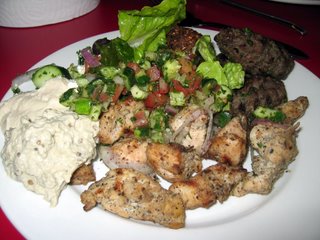 Babganouj, Hummous, Chicken, Lamb Meatballs, Various Salads
The meat was a but cold, but was certainly flavorful. The babganouj was awesome. 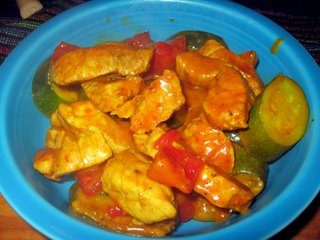 Pork Tenderloin and Zuchinni Curry
I started making dinner quite late, as we've been working pretty late. This turned out quite nicely and was super quick to cook.

Brown the pork quickly in a bit of olive oil. Add the onions, garlic, salt and pepper, and sautee for a couple more minutes. Add the tomatos and the coconut milk and all of the spices and stir thoroughly. Add the zuchinni. Simmer over medium for 20 minutes or so, until the liquid has reduced to form a thich sauce and the zuchinni is tender.

This was by far the best catered in lunch we've had at work. Lots of choices and they were all yummy. Also, the food arrived hot, which is a rarity when using Waiters On Wheels. 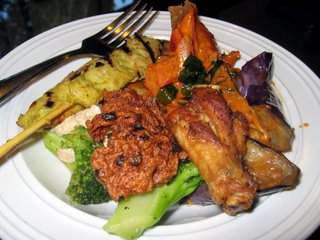 Tofu with Brocolli, Chicken Satay with Peanut Sauce, Spicy Catfish with Eggplant, Chicken Wings, a kind of fish fritter. It was all quite tasty. 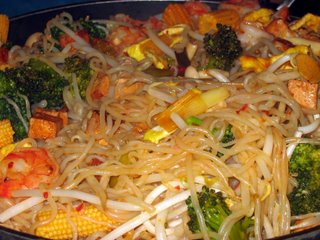 Pad Thai
This was much better than the last time I made it, but I'm not totally sure why.

Fry pressed tofu in a bit of soy sauce until crisp on all sides--set aside. Beat eggs lightly and fry over low heat in a shallow pan so as to form a very thin omelette. Cut into thin strips and set aside. Cook shrimp in 1 tb of oyster sauce until 3/4 of the way cooked and set aside. In a wide, deep pan sautee the scallions and garlic on medium until beginning to brown. Add 1/2 the chili garlic sauce. Add the broth and the noodles and simmer for 10 minutes. Turn up the heat and add the baby corn and the brocolli. Add all of the other ingredients except the egg, the shrimp and the sprouts. Simmer until broth is almost evaporated and broccoli is tender. Add the shrimp and egg and stir for 1 minute. Add the sprouts and toss thoroughly. Serve immediately.

Alexis had never actually eaten at Chevy's and Giao had banned it, but this catered in lunch at work wasn't terrible...although it wasn't really good either. 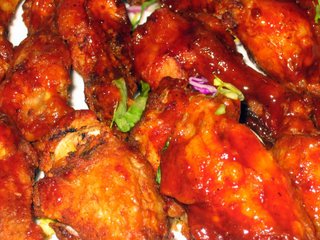 Chicken Wings
Cold, but the sauce was pretty good. 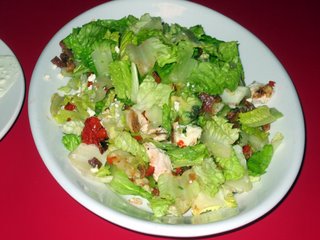 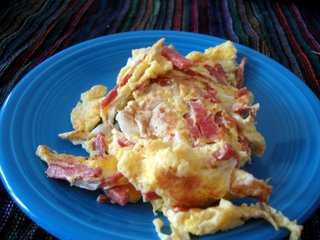 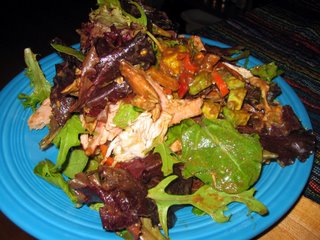 Another catered in at work, this time from Caffe Amici. The only thing we could eat was this salad, as the rest was full of carbs--lasagna and panini. 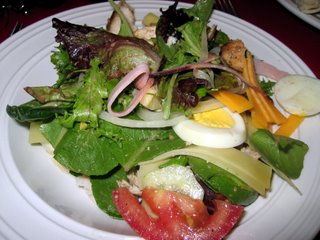 Chef's Salad
This was ok, but not great. Most of the meats and cheeses were sub-par, but at least the lettuce was not wilted.
Ratings:
Food: 0 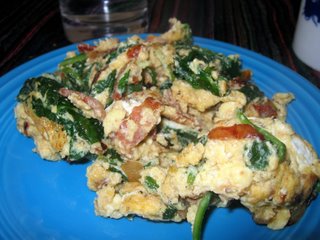 We were invited to a friend of a friend's for Easter dinner. It was a great time and the food wasn't 1/2 bad either. 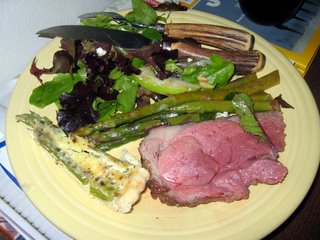 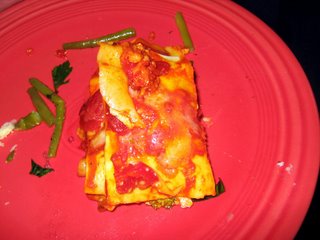 Lasagna
Tasted better than it looks. Note to self: don't take pictures of red food on a red plate.
# posted by Giao and Alexis @ 4:54 PM 0 comments