Since we were on our way out to the Richmond, we decided to grab dinner at Rohan, a Korean bar/restaurant that we've been to before, but not in a long while. 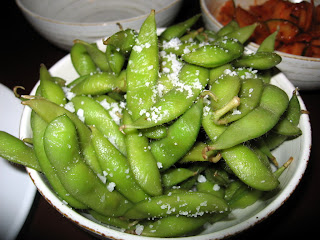 Edamame with Sea Salt $2
These are served cold, but are quite tasty. 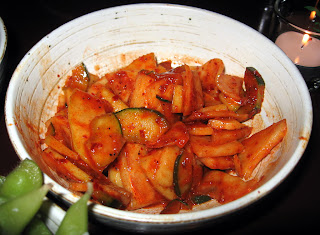 Kim Chee $2
This version is not very rotten tasting, which means Alexis can eat it, but Giao doesn't like it as much. 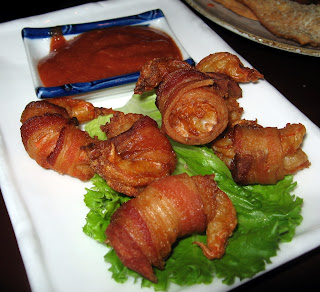 Bacon Wrapped Shrimp $9
These were crispy, porky goodness on the outside and tender shrimp on the inside. The cocktail style dipping sauce these were served with was strange, but not entirely bad. 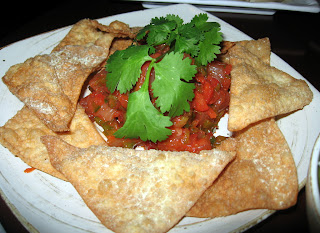 Tuna Tartare $12
This rather large portion resembled poke more than tartare as the chunks were quite large. It was spicy with lots of crunchy veggie bits that added a nice texture contrast. 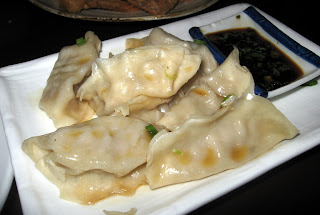 Steamed Beef and Veggie Dumplings $8
These were ok, but the insides were a bit too mushy. 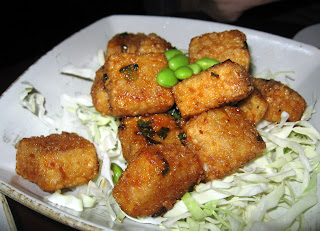 Crispy Tofu $8
Alexis had remembered this dish as amazing, but when we had it again it was good, but not wonderful. The crust was a bit too thick and the sauce a tad too sweet. 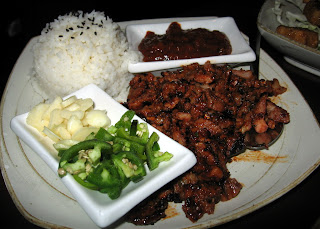 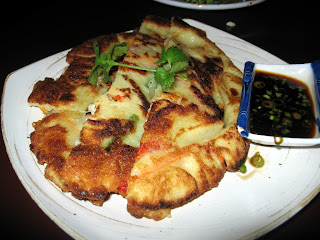 Onion Pancakes $7
This was the only real stinker of the bunch. These were thick and moist and all around gross.

After waking up early and house-hunting, we were hungry. So hungry that we decided to eat lots of carbs. 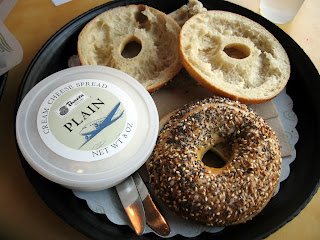 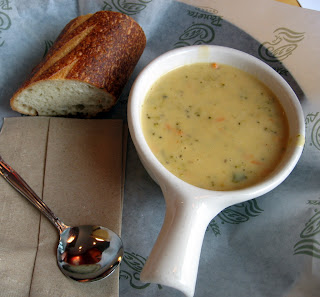 Broccoli Cheese Soup with French Baguette $5
The soup was thick and flavorful, but the addition of carrots was a bit strange.

Before heading off to a movie, we stopped for drinks and dinner at B Restaurant, a place with a nice atmosphere, good happy hour specials and a really terrible location for foot traffic. Their happy hour (4:30 to 7:30) seems to attract a decent crowd, at least on Friday nights, but the tables are rarely full, which is unfortunate, since they do have some decent food. 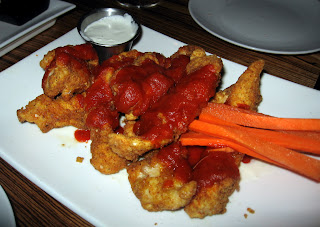 Spicy Chicken Tenders $12
These were supposed to be wings, but they were out of wings, so they were tenders instead. The meat was tender and juicy, but the crust was a bit too thick. The spicy tomato sauce was a bit weird also. 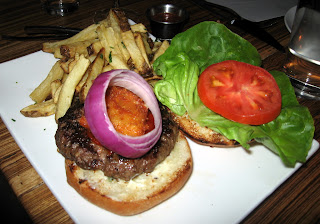 Night Burger $11
This burger is topped with a mound of fried cheese and is a pretty tasty, solid burger. 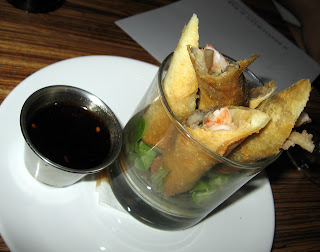 Shrimp Spring Rolls $7
This happy hour special was decent, but not special in any way.
B Restaurant
720 Howard St
San Francisco, CA, 94107 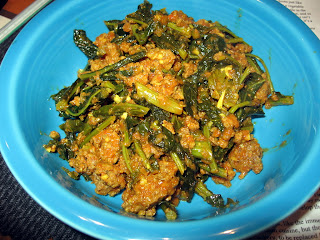 We had a lot of greens in the house and we needed something to do with them. This ad-hoc curry turned out to be just the think. I'd never really heard of making a curry with ground meat until I read Vij's cookbook and although this recipe isn't from that book, but rather, Alexis' head, it turned out quite well.

Sautee the ground beef until beginning to brown. Drain excess fat. Puree the onion, garlic and tomatoes in the food processor until smooth and add to the pan. Add the spices. Stir to combine. Add the greens, cover and simmer for about 20 minutes. Remove the cover and simmer until a thick sauce has formed. 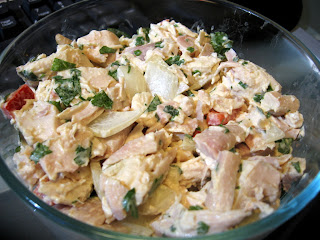 Mix together the mayo, mustard and lemon juice until smooth. Then mix with the rest of the ingredients.

Fried chicken, for us, is both guilty pleasure and comfort food. It's no wonder that we tend to order it when we see it on the menu, or seek it out on weekend mornings. Our recent visit to the new Jolibee inspired us to look back and collect all the offerings around the city. We'll cover them in roughly least to most preferred. 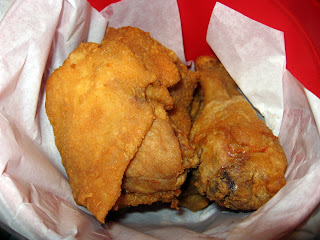 Fried Chicken Bucket--6 pieces for $12 from Jollibee
When a branch of the Phillipino fast food giant opened up down the block from us, Alexis kept lusting after the fried chicken. The results were mediocre, with neither the chicken nor the coating very good.
Jollibee
200 4th Street
San Francisco, CA 94107
Health Code Violations 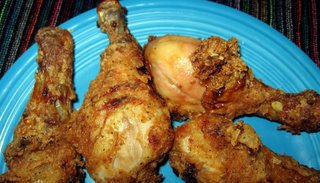 Fried Chicken from Whole Foods
Groceries stores are easy and convenient places to get your chicken fix. Whole Food's coating tends to fall off too easily, and all the time spent in the heat lamps dries out the chicken.
Whole Foods
399 4th Street
San Francisco, CA 94107 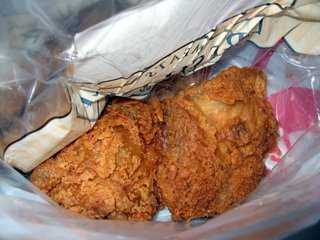 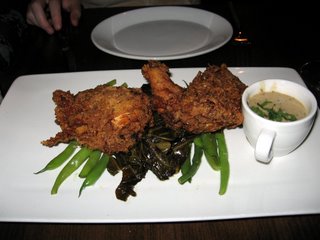 Fried Chicken from Maverick $19
This is the first upscale version that makes the list. Usually this is served with mashed potatos, but we asked for veggies instead. The chicken was underwhelming, particularly considering the price. 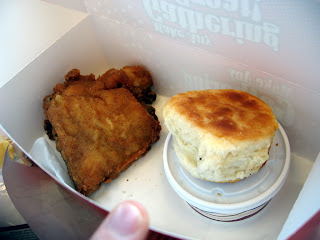 2 Piece Dark Meat from KFC
KFC has become the de facto standard because of the amount of locations and price. Giao and Alexis tend to split on this, since the meat is very salty even though it's juicy. Giao will wolf this down, while Alexis gets the popcorn chicken. Usually you can get a deal on the dark meat. 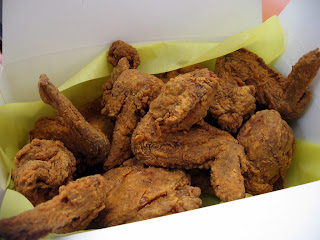 10 Piece Dark Meat from Lousiana Famous Fried Chicken - $14
This hole-in-the-wall Tenderloin chicken joint serves cheap and tasty chicken. It's not quite the deal it seems, because the pieces are on the small side, but still probably the best deal on the page. 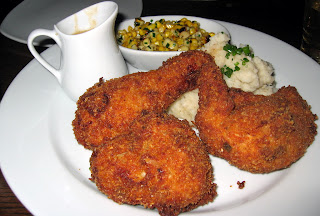 Fried Chicken from Circa $20
Great crispy panko coating, tender meat inside. The only complaint would be that it's a little pricy.
Circa
2001 Chestnut Street
San Francisco, CA 94123 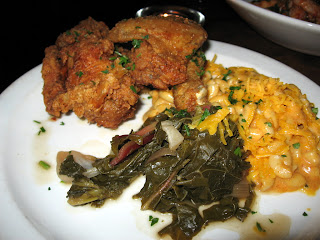 Fried Chicken with Collard Greens and Mac n' Cheese from farmerbrown - $16.50
This is Farmerbrown's standout and signature dish. Though we agree with the throngs of admirers of this dish, they need an upgrade on the mac and cheese and the rest of the menu so we have another reason to go there.
farmerbrown
25 Mason Street
San Francisco, CA 94102 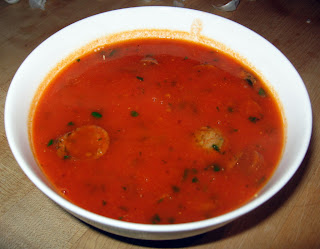 Since we've been getting so many tomatoes in our CSA box, we've been making a lot of tomato soup. For this variation, use the soup recipe here and just add about 4 or 5 sliced, pre-cooked chicken sausages and a handful of chopped cilantro. I used habanero chicken sausages and they gave the soup quite a kick. Note that because the chicken broth and the sausages both contain a fair amount of sodium, there's no need to add extra salt to this soup. 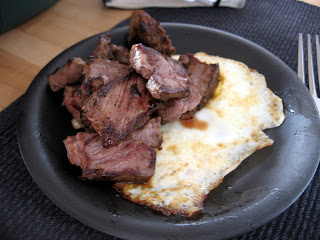 When you make a steak that is just way too big for dinner and you can't possibly eat it all, don't feel bad. Just put it in the fridge and in the morning, slice it up thinly, warm it up in a pan and eat it with a fried egg. Delicious.

Now that the Michelin ratings for Northern California are out, we'd thought it be fun to look back and see how much we agree with them. Even though both of our scales are similar (going to 3), ours is a bit different. We would put our 3's at the same level, but our 2 is more like their 1 Star, so we'll have to play it by ear. We, sadly, also don't have the funds to go to these restaurants every year, so we'll just use the last time we went.

Immediately what jumped out at us were that Coi and The Dining Room at Ritz-Carlton, which are the only 3's we gave out in North California (quick aside, French Laundry is definitely a 3, we just haven't been there in the life of this blog) were given only 1 star. Quite simply, Ron Siegel's Dining Room is our favorite tasting menu in the city, we would go there every day if we could. Daniel Patterson, on the other hand, just stunned us with his inventive and bold dishes.

Aqua, Manresa, Michael Mina (also our recent catering post) all scored 2 Food from us and 2 Stars from Michelin. Aqua is probably a weaker '2' then the rest of them, and I would say it's inexplicable that they are rated ahead Gary Danko's (and the 2 listed above), but you really can't go wrong with any of these. Incidentally, we had our the best meal of our lives (pre-blog) at Michael Mina, when they had their truffle menu, but our last visit was not as mind-blowing.

For Ame, Range, Cortez, Rubicon we pretty much agreed with Michelin scoring them a 1 star (we have them down as 2 Food), while we thought they overrated One Market and Quince. (We gave them a 1 Food).

We also thought they missed some real great restaurants in A16, Bong Su, Fringale, Spruce (maybe too new), Jeanty at Jack's (though their sister location Bistro Jeanty is a Michelin 1 star), Plumpjack Cafe (NB: Both our visits were during James Syhabout's short stint as Executive Chef), Ad Hoc and Lark Creek Steak. 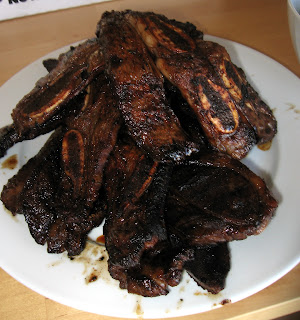 Korean Inspired BBQ Short Ribs
You can buy these thin-cut short ribs at any Asian grocery store. If you are in SF, try Sunset Super. We were at a friend's house who has a nice, big BBQ, so we grilled these short ribs after marinating them for between 6 and 24 hours.