Chicken Bake $3.49
This is basically chicken, cheese and Caesar dressing, wrapping in dough and baked. It always sounds better than it actually is.
# posted by Alexis @ 12:30 PM 0 comments

We read about a dim sum place in the Tenderloin that serves dim sum all day and is open late. And cheap too. We had to try it. Any place that serves dim sum all day is already winning in our book. We were pleasantly surprised with the quality and speed. They have a take-out counter and our food was ready in less than 10 minutes. I think the whole meal, which left us stuffed, cost $20. 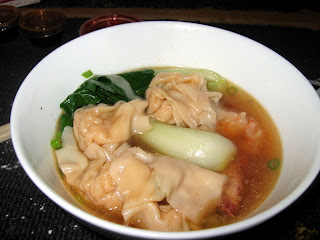 Won Ton Soup with Seafood and Veggies
This was one of the best won ton soups we have ever had. It was packed with meaty won tons, shrimp, BBQ pork slices, squid and bok choy. The broth was intense and rich. Overall this was a great soup. 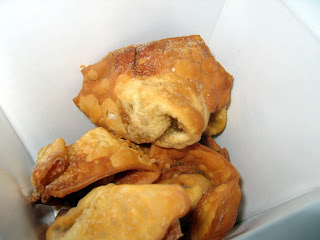 Fried BBQ Pork Won Tons
These sounded great, but in reality fell a little flat. There were a tad too starchy without enough filling. 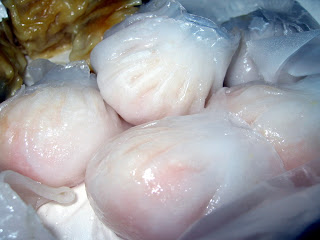 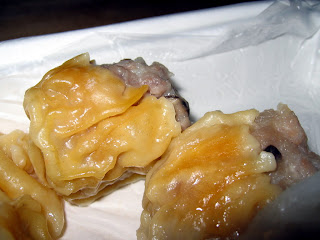 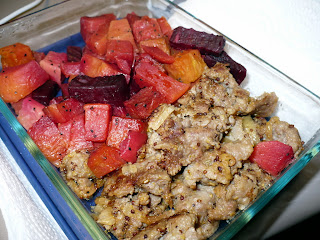 Season with olive oil, salt and pepper and roast, covered, on 375 for about and hour, or until veggies are fork tender.

Brown the sausage, cutting into small pieces with a cooking utensil as you go. Add the onions an sautee a few more minutes. Then add the mustard and the cider vinegar and cook until sausage is cooked through. 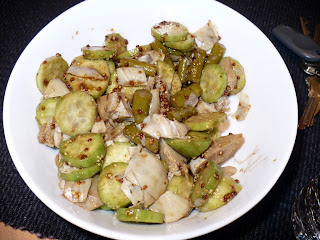 For some reason, the people in Alexis' life like salads without lettuce better than those with. This is a delicious mixture of crisp, baby cucumbers, pickled asparagus and marinated artichoke hearts in a balsamic vinegarette. 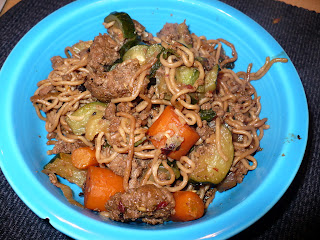 We had some veggies that were gonna go bad soon and so Alexis whipped up a quick and tasty meal.

Sautee the onion in a bit of olive oil and the soy sauce. Add the turkey and brown. Add all of the other ingredients, stir to combine, then cover and simmer until veggies are tender, stirring every once in a while.

Restaurant Websites: Why the Music?

Just a short rant. Why, oh, why must every restaurant website blare music at you? First it shocks you, then you frantically look for the mute button, you finally shut it off, and then you are just annoyed at all restaurants. Why don't restaurants understand that no one wants to listen to their music?

We've eaten sous-vide (French for "under vacuum") often in restaurants, but we'd never tried it ourselves. Although the technique has been around for about 30 years, it is new to the home cook. A proper sous-vide set up requires a vacuum sealer, a special thermal regulator and a crockpot. The method involves sealing a protein inside of a vacuum sealed bag, then cooking it on a super-low temperature for a very long time. Because of the vacuum sealing, the protein does not lose moisture and this, in conjunction with the long, low cooking, produce a very moist, very tender end result. Our friend's, E and E, brought the whole set up to the cabin in Tahoe and we spent the better part of the weekend experimenting. All of our experiments ended up successful. Sous-Vide Egg
We'd had sous-vide eggs in restaurants before and were always baffled by their texture. What we learned is that because the yolk of an egg solidifies at a lower temperature than the white, when you cook an egg sous-vide you get a custard-like yolk with a barely solid, almost runny white. The white was a bit unnerving, but the yolk was delicious with a bit of salt.

Place the egg (still in the shell) directly into the water in the crockpot. Cook on 145 for 1 hour. 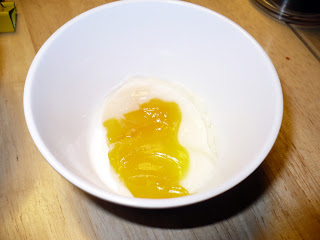 Another picture of the egg (above) 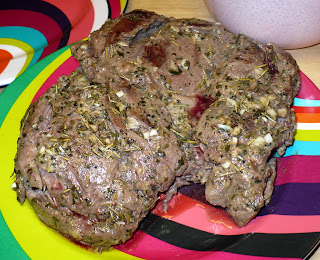 Sous-Vide Boneless Leg of Lamb
This was the strangest piece of meat we have ever eaten. It was so tender you could cut it with a fork, almost too tender. I think you could market this to geriatrics with great success. Even so, the flavor was great and we thought our first experiment turned out well. The interior was medium rare. There are two things to note here as well: 1) You can not marinate with oil because the oil will go rancid during the prolonged cooking time and 2) For looks, it is necessary to quickly sear the meat after removing it from the bag, otherwise it just looks grey and unappetizing.
-1 butterflied, boneless leg of lamb
-6 cloves garlic, minced
-1 ts each, parsley, thyme and rosemary, salt and pepper
-1/4 cup dijon mustard

Mix the spices, mustard and garlic together to create a wet rub. Rub all over the lamb and seal in a vacuum sealed bag. Place in the water in the crockpot and cook on 135 for 3 hours. Remove from bag and sear before serving. Boil down the excess juices from the bag and add a tb of flour to create a gravy for the meat. 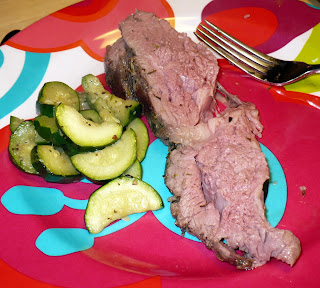 Another picture of the lamb (and simple sauteed zuchinni). 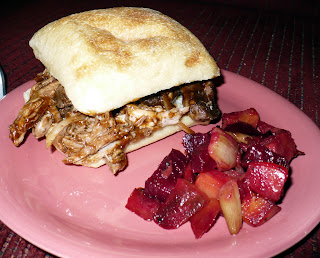 BBQ Pulled Pork Sandwiches with Roasted Root Veggies
This was out most successful of all of the experiments and we picked a good piece of meat for this method of cooking. When we took the meat out of the bag it simply fell apart with a slight tug of a fork. We used a 5 lb boneless pork shoulder, which we also seared when done both for color as well as to reduce any risk of botulism. We served the sandwiches with a mixture of roasted beets, rutabaga, turnip and fennel.

-5 lb boneless pork shoulder
-1/2 cup dry BBQ rub (We used a mixture of rubs we found in the cabin kitchen, but if you were to do it at home, cayenne, pepper, brown sugar, garlic powder, salt and paprika would do.)

Rub the dry rub all over the meat, really rubbing it in. Place the meat in a vacuum sealed bag and place in the water in the crockpot. Cook at 170 for 13 hours. Remove meat from bag, reserving the excess juices. Sear and then pull the meat apart with a fork. In a saucepan, boil down the juices until reduced by about 1/3. Pour the juices back into the meat with a bit of BBQ sauce if you want it. Spoon the meat over crusty bread and eat. 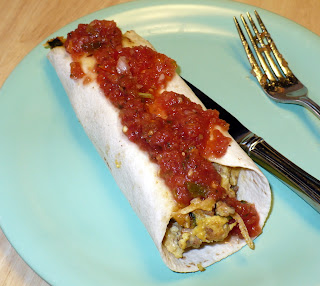 We had some leftover zuchinni from a couple nights ago and a bunch of pork sausage, so we sauteed some onions with the sausage and zuchinni, made a scramble and placed it inside a tortilla, which we then layered with cheese and pan-fried until the tortilla was crispy and the whole this stuck together. We then spooned fresh salsa over the top.

Big Sandwiches from the PDQ in Lake Tahoe 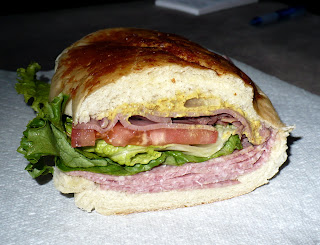 Salami and Roast Beef Sandwich with Provolone on Garlic Bread $7
These sandwiches are huge. Each sandwich is made on what is basically a whole loaf of bread. You can choose white, wheat, cheese, garlic, pesto or jalapeno bread, all baked on-site daily. The ingredients were fresh and plentiful, making a totally satisfying meal of a sandwich.
# posted by Giao and Alexis @ 2:00 PM 0 comments 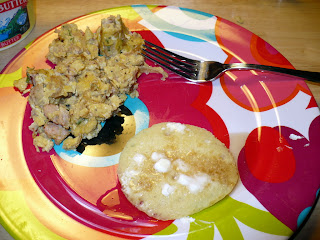 Usually, we don't really like pancakes because they are heavy and not particularly interesting in flavor. However, our friend, E., made these rather delicious, super-light, slightly tangy buttermilk pancakes that we devoured. Alexis also chefed up a scramble made from the leftover wonton meat.