Though we just decided to reheat and eat the yummy lasagna from last night. We did bust out the girolle to shave some of our favorite cheese, the tete de moine. We found out about tete de moine at Fleur de Lys, a french restaurant in SF, and they told us they imported it from France. However, weeks later, we found it Whole Foods. Then we decided we HAD to have the special "girolle" (tete de moine shaver), and despite the fact that it cost us $40 for a device that has a singular purpose, it really does make the cheese taste way better. 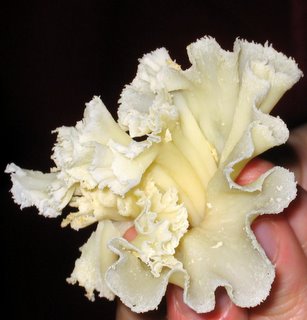 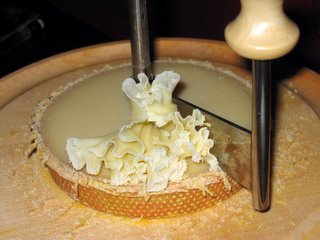 Comments:
after looking at your blog, it seems you have some great low carb recipes. do you follow this diet and if so, has it worked well for you?

Hey, yeah, we do eat low carb. Giao actually has eaten this way for a long time because he used to be a bit chubby. And several months after I moved in with him (since I was doing all the cooking), I started eating that way as well, sort of by default. But I can say that since I started eating low-carb, I have probably lost 15 pounds or so. Not bad, considering it doesn't really feel like a diet.